Our group met at St Pancras International in plenty of time for the 08:31 Eurostar service to Amsterdam Central. Heavy queues for earlier departures were still snaking their way through the ordinary check-in and passport channels, as we were invited through the Business Premier check-in area.

As had been the same a few weeks previous when I travelled through to Brussels, the holiday crowds (and very slow customs checks by the French border patrol) were causing havoc, with the 07:01 to Paris Nord & 07:19 to Marseille St Charles both meeting with delays as a result. Fortunately, our service was able to depart on-time, although it was very much busier than expected, as a direct result of the cancellation of the 06:47 to Brussels Midi.

Trains through to Amsterdam are required to be operated by the newer e320 Eurostar sets, and ours was 374005/4006. A non-stop run to the Belgian capital followed our departure from London, where the train emptied significantly. North of Brussels, all high-speed services use a new dedicated line, which although it is not fully finished in the northern suburbs, does reduce journey times on the Belgian-Dutch route. A detour through the tri-level station (the fourth level is for retail and commercial) at Antwerp Central was our only really slow section. This station is an architectural wonder, and deserves a visit in its own right.

A brief stop in Rotterdam was followed by our arrival into Schipol Airport station. Here we were greeted with the ominous news that our train would be terminated due to a major police incident unfolding at Amsterdam Central itself.

With our onward connection towards Germany scheduled to start from Amsterdam, we quickly decided upon an alternative plan and made our way to Amersfoort, where we could intercept our intended service. Here we had time for lunch in one of the station restaurants, plus also to view the items of heritage rolling stock parked adjacent to the platforms. These included a former NS Class 1200 Electric loco (1251) and two “Dog-Head” (Hond-Kop) units now withdrawn from regular service. 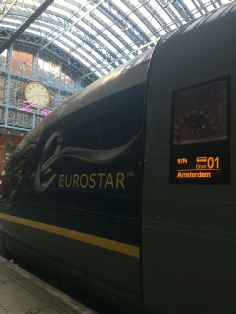 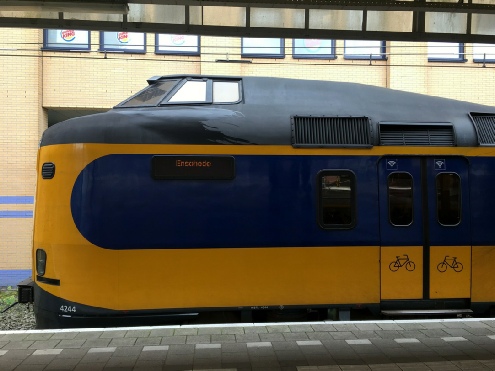 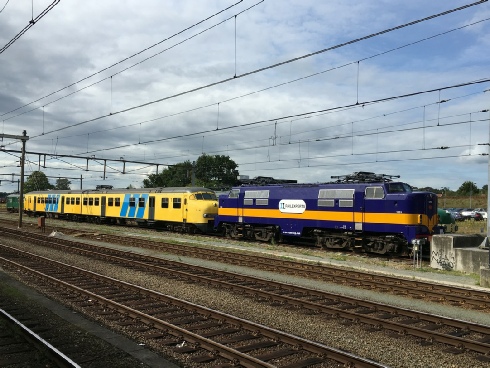 ICM EMU, 4244 at Amersfoort.  These units are nicknamed Koploper, because when originally built they had a so-called "walk through head” - gangway doors under the cab.  These trains lost these doors on refurbishment and are now known as Intercity Materieel Modern (ICMm)

Having returned to the main station, we suddenly found our train change from ‘on-time’ to 55mins late (which eventually became 70mins late). This was a direct result of the incident in Amsterdam, which was still ongoing according to local reports. Our brief passage through The Netherlands ended without further issue, and upon arrival at Bad Bentheim our train (IC149, destination Berlin Ostbanhof) stopped for brief locomotive change, with NS 1752 giving way to DB 101035.

Our next stop was at Osnabrück, where we were due to connect into a train towards Hamburg. As we were still running around an hour late, we had missed our original connection, but an alternative was available, although we would have to be quick!!

We just made it, even with the split level platform change, and found seats in the restaurant car, where we ordered an evening meal. I hadn’t thought about having entertainment whilst on board, however, the comedy value of watching a German youth netball team snaking back and forth trying to find seats between fully-reserved adjacent carriages was mildly amusing to say the least. Arriving into Hamburg-Harburg, we caught a taxi to our hotel to conclude a long, yet eventful, day of travelling.

Saturday dawned and our group met for breakfast before boarding a local bus back to the station. Here we boarded an S-Bahn service into the city and through to Landungsbrucken.

The S-Bahn is a 1200v DC ‘side-contact’ system, operating across nine different routes throughout the Hamburg area. Trains operate in 8-car formations (no through corridor), although some split to serve two destinations in the outer suburbs.

A detailed review of the Hamburg S-Bahn system can be found on our website – taken from a 2001 presentation given to the Institution by Herr Hartmut Schnorr, the Assistant Operating Director from Hamburg (S-Bahn) and member of The L&CI. Hamburgh S-Bahn

Miniatur-Wunderland is housed in one of the former dockside warehouses, all of which have been restored externally, and house various museums, exhibits and galleries.

Once inside ‘Wunderland’ the visitor is confronted by extraordinary sights and displays of craftsmanship and modelling techniques. Spread over three floors, the displays have such incredible detail and life-likeness, you almost think you’ve been transported to the actual location – albeit in miniature form.

The models, which span an area of nearly 2,300 square metres, are all interlinked by a vast railway layout running for almost 20,000 metres, with around 1,300 actual trains running. They excellently depict the numerous companies and operators of the various countries. The statistics continue to impress, with around 500,000 led lights illuminating the models and around 400,000 individual figures (all apparently different in design/costume). The whole system is overseen from a central control hub of over fifty computers, with several operators ensuring things keep ‘on track’. It is also documented that, so far, around 900,000 hours of construction have gone into the whole project, at a cost of around €30million.

The airport (a fictitious location called Knuffingen) is an absolute marvel to watch, with airplanes actually taking off through the clouds! 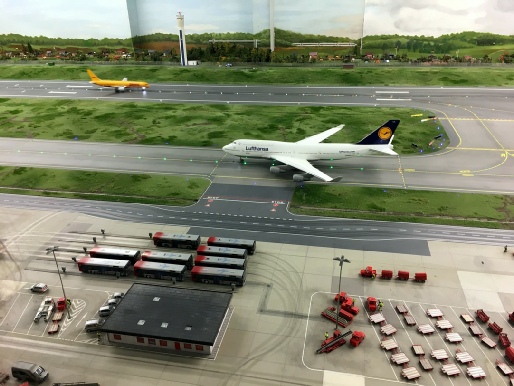 A scene in the 250m square Swiss section

The  funfair in the Middle Germany section complete with working rides

A night time scene at Kuffinger Station in Germany

And Kuffinger Station by Day

A Lufhansa Boeing 747 taxiing towards the runway at Knuffingen airport

A 777 gets ready for take-off down Knuffingen runway 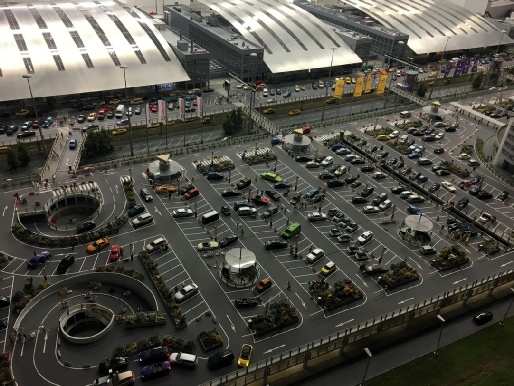 The models are of various European countries, including Germany, Austria, Switzerland, Italy and the Scandinavian region, plus Las Vegas and the US Mid-West. New attractions are to be added in 2019 onwards (including the UK and Ireland, Australia and others in future years). 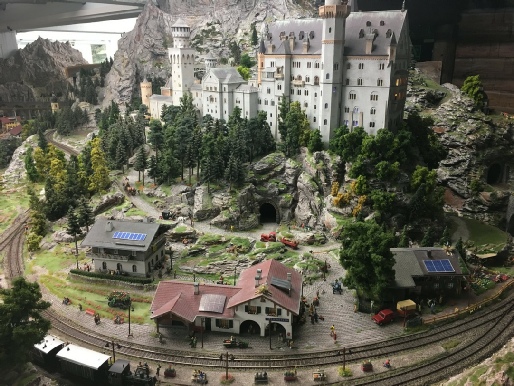 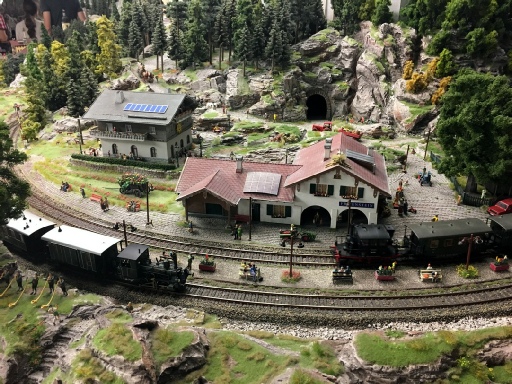 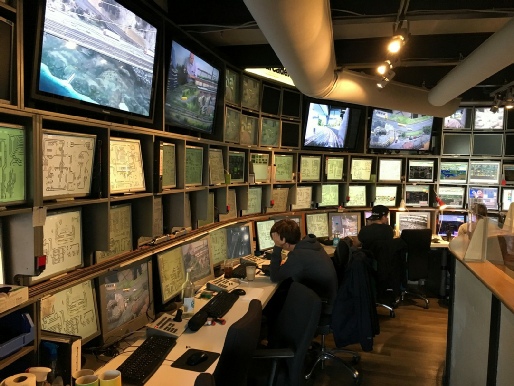 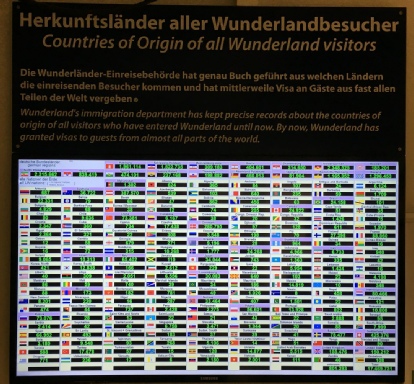 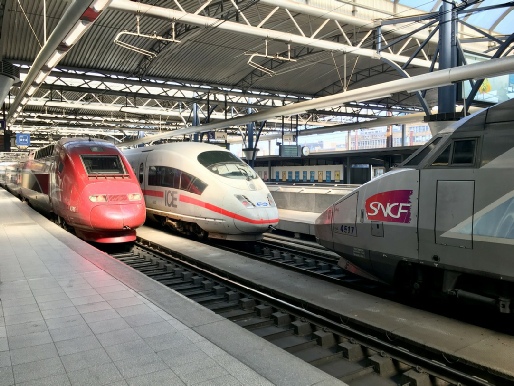 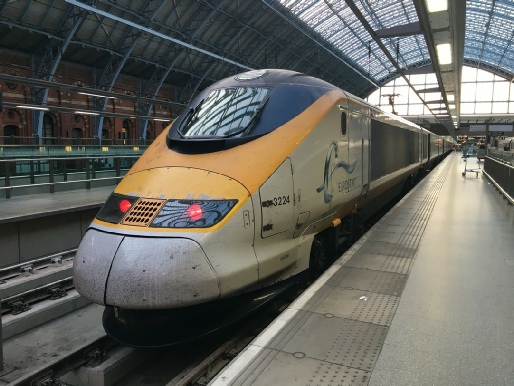 Alan Spencer had purchased an HVV Hamburg Dayticket for the group (valid on all local trains, buses and river boats), so we opted to take an afternoon cruise along the impressive River Elbe. Several routes radiate from Landungsbrucken, heading in both directions. Our journey took us past many of the port areas where massive ocean-going container ships were being loaded/unloaded, and a couple of very impressive cruise ships, which were moored up, with their passengers taking onshore excursions.

From Hamburg, it is an 80-mile passage along the River Elbe to the North Sea at Cuxhaven.

In 2017, the Port of Hamburg played host to more than 12,000 vessels – nearly 500 of these had a length of over 1000 feet. The port boasts it can host 320 ocean going vessels at any time, and with a turnaround of over 9 million containers, rightly holds the claim to be Europe’s second busiest harbour. We also spotted the Rickmer Rickmers Museum ship, a former Russian Submarine (B-515, although it carries the number U-434) which is now a public museum and several steam-powered paddle ships, which operate tourist trips along the river. Some very impressive buildings line the banks of the river, including the Elbphilharmonie, the Dockland and the St Pauli Fishmarket.

To end our day, we took the S-Bahn service back to Hamburg-Harburg where we stopped for much needed liquid refreshment. On our way back to the hotel, we were alerted by a local passenger to a Greek owned restaurant (he had obviously overheard our conversation about looking for somewhere to have dinner), so we jumped off the bus a few stops early and enjoyed a very pleasant and rather large evening meal.

Our last day started, and we were heading back to the UK.

IC2313 took us from Hamburg to Cologne, with a light lunch served onboard in the BordBistro. Here, two of our group were heading for a few days in Boppard-Hirzenach, whilst the rest, joined an ICE (set number 4653) service back to Brussels Midi.

Whilst changing trains here, I caught a fairly unusual sight of three different ‘high-speed trains’ in one photo – an ICE (our arrival from Frankfurt/Cologne), a Thalys (heading to Amsterdam) and a TGV (heading for Paris Nord). If I could have turned myself inside out, I could have included a Eurostar set also (just arriving from London) which arrived on the platforms behind me!

Our return Eurostar was at 16:56, although due to a late swap of trainsets, we boarded an un-refurbished ‘mixed-formation’ set (373224 and 373213 – something I have never seen in all the years Eurostar have been operating?), with the original horizontal window bars.

At Lille Europe, we had an unscheduled 40minute stop after an earlier security alert had caused the station to be evacuated, with subsequent delays for boarding passengers to clear through security channels. Additional stops at both Ashford International and Ebbsfleet made our arrival into St Pancras almost 50minutes behind schedule.

All in all, a very enjoyable weekend, in excellent company.

For those that haven’t visited, I can’t convey enough how amazing this place is (for ages 3 – 93), and would recommend a visit for you and your family or friends. Following our visit, of around 4hours, the group met in the restaurant for an excellent lunch. As ever, the chat was about railways past and present.

Wunderlands Barvaria, including the Neuschwanstein Castle 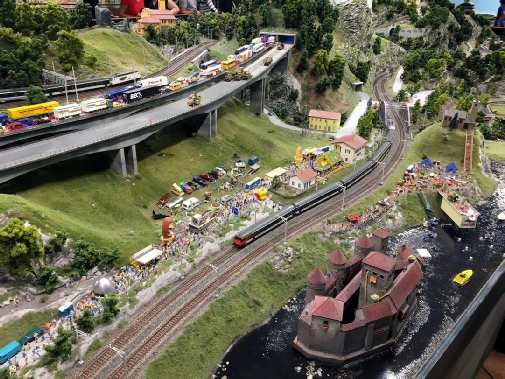 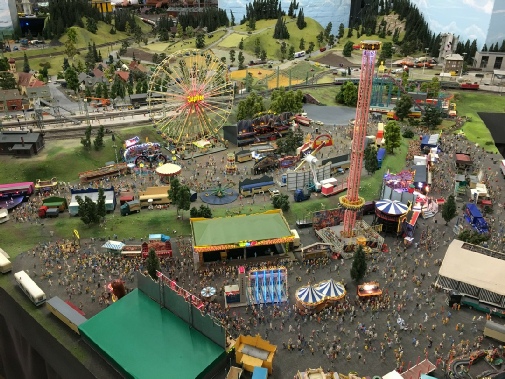 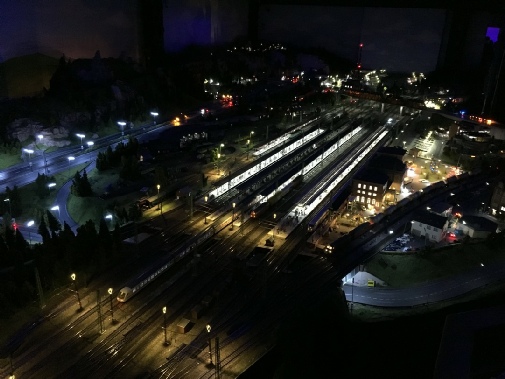 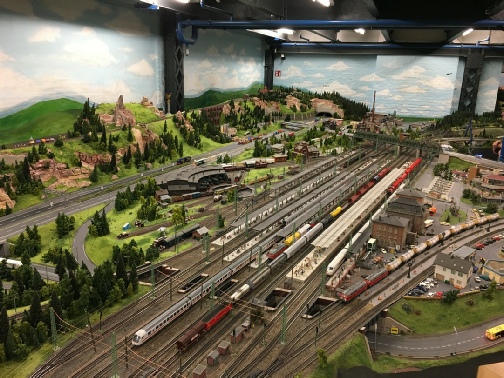 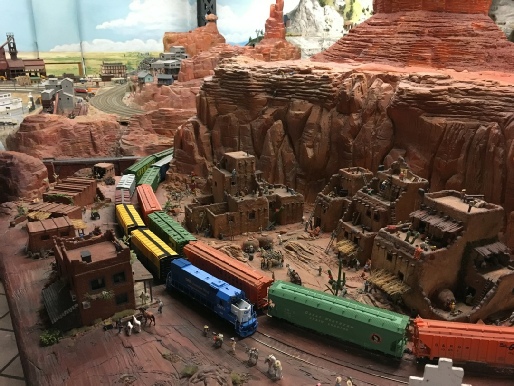 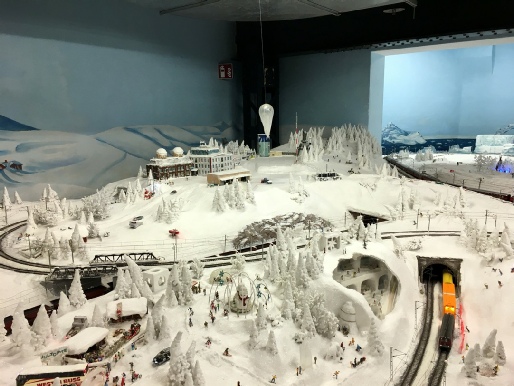 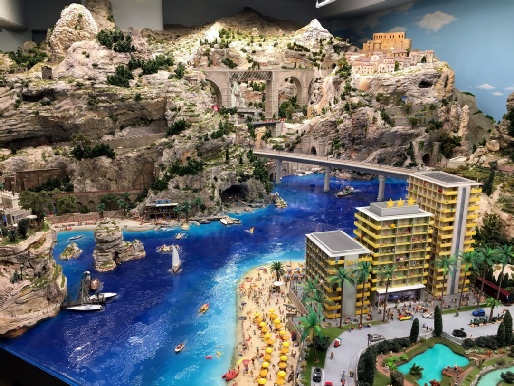 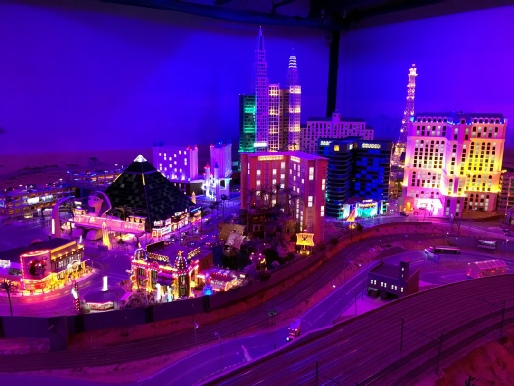 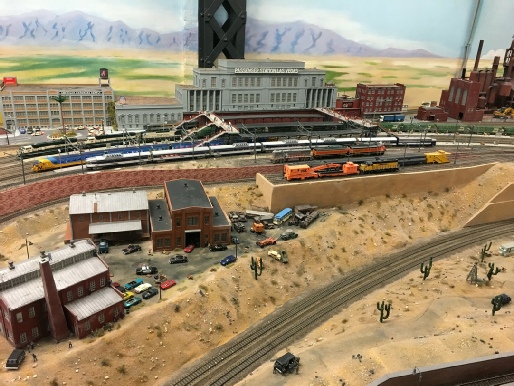 Les Vegas by day and night plus

Visitors to Minitur Wonderland come from all round the World 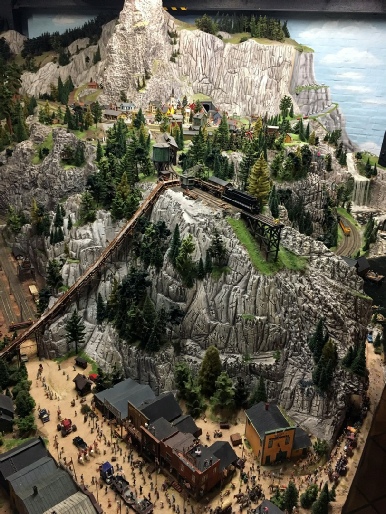