The 2018 AGM was held at the Steam Museum in Swindon.

As well as the AGM itself, there was also an opportunity to visit the museum, which is on of the former Swindon Railway Works buildings, now grade II listed.

The Institution Council carrying out the AGM proceedings.

After the AGM and lunch, there was an opportunity to see the museum exhibits.

Caerphilly Castle was withdrawn in 1960 and donated to the National Collection.  After cosmetic refurbishment in Swindon works it went on display in the Science Museum in London from 1961 to 2000, before being moved to Steam. 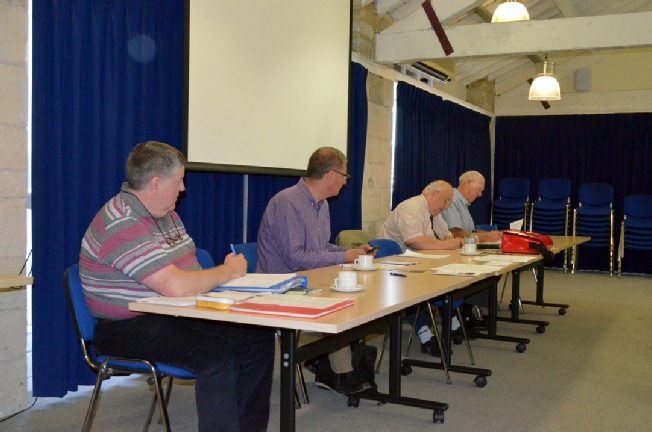 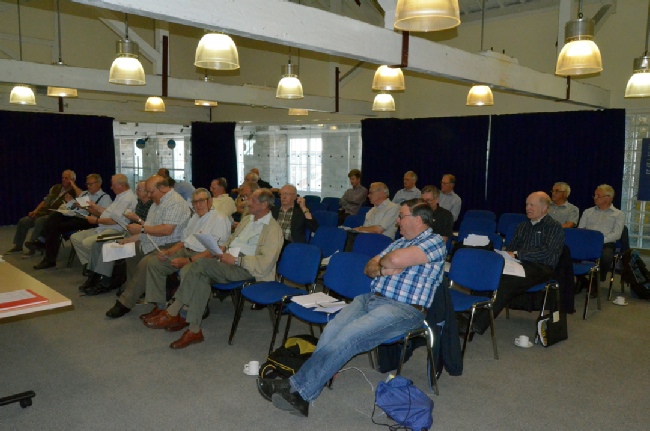 Institution members and Council during the AGM, held in a conference room in Steam 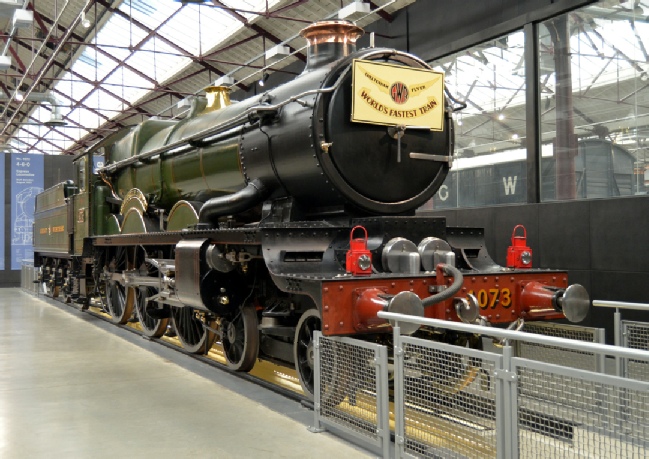 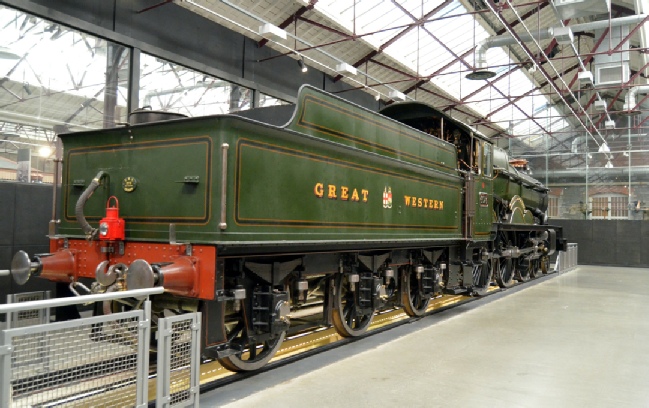 Caerphilly Castle was exhibited at the 1924-25 Palace of Engineering in the British Empire Exhibition in Wembley Park in London - where it was displayed end-to-end with 4472 Flying Scotsman.

Whilst Flying Scotsman almost dwarfed the Castle in size - a board next to the Castle claimed it was the most powerful locomotive in Britain, a claim disputed by the LNER.

Locomotive trials were subsequently held in April and May 1925 between the LNER and GWR locomotives, with a Pacific working on the GWR for a week and a Castle on the LNER.  The trials showed that at the time the Castle was a superior locomotive with sectional running times on the LNER which were without precedent from their own locomotives. Additionally, during the trials the Castle was more economical in coal consumption as well as being much more sure-footed, especially on the steep climb out of Kings Cross - the Castle reaching Finsbury Park a whole minute sooner than the Pacifics with similar loads. 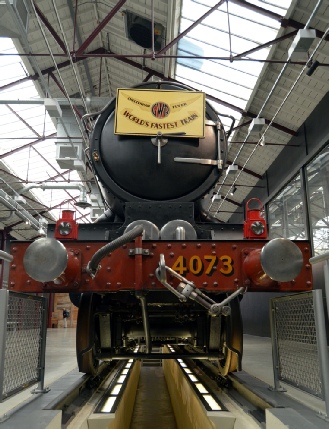 A frontal view of Caerphilly Castle whilst descending into the pit underneath.

The headboard is for the “Cheltenham Flyer - The World’s Fastest Train”.

From 1932 the Cheltenham Flyer was timetabled with just 65 minutes between Swindon and London - a journey of 77 ¼ miles - which meant an average speed of 71.3 mph - the first train to be scheduled at over 70 mph in the World. 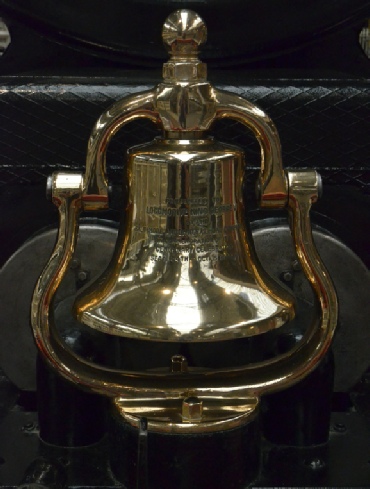 “Presented to locomotive King George V by the Baltimore and Ohio Railroad Company in Commemoration of its Centenary Celebrations Sept. 24th - Oct 15th 1927” 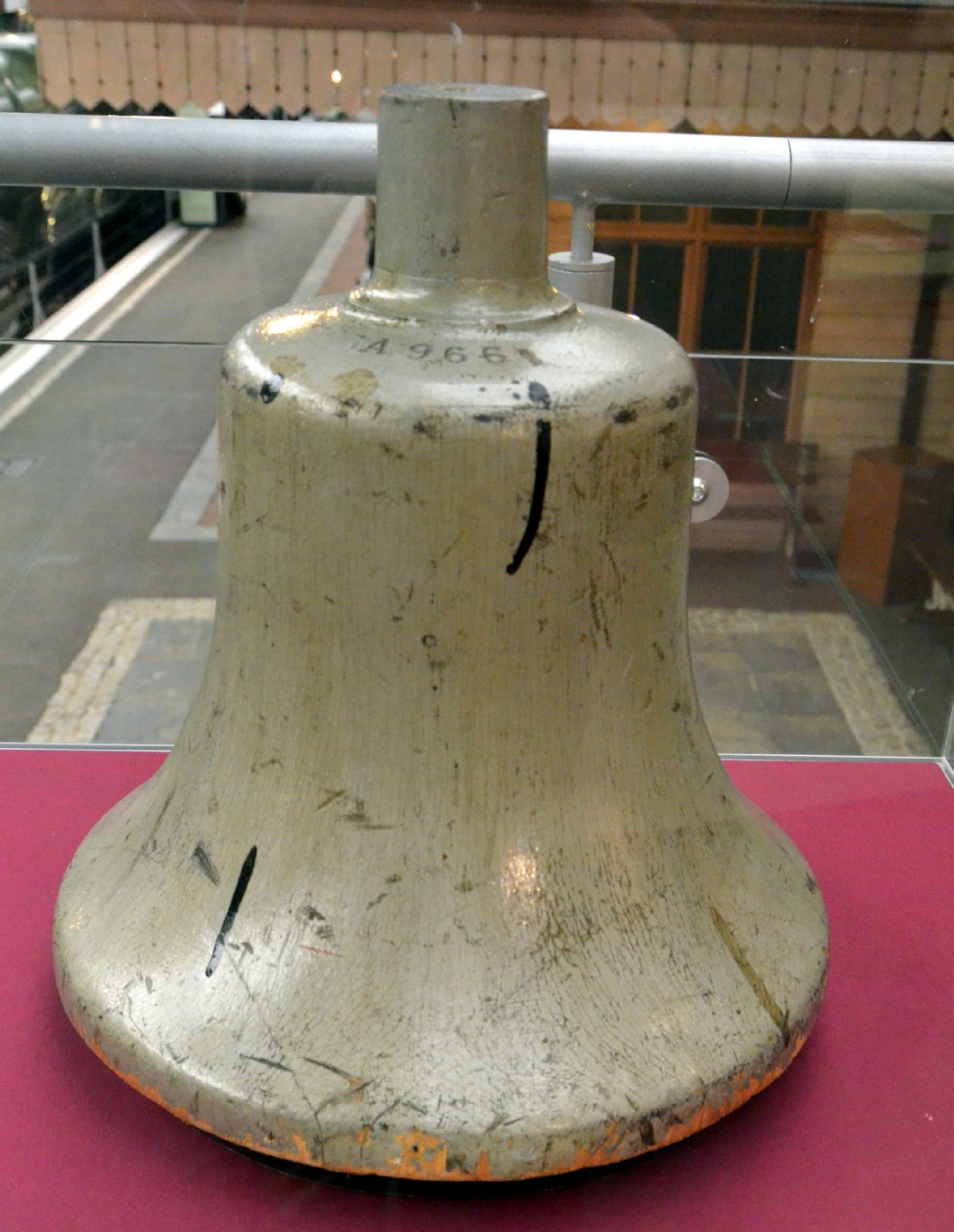 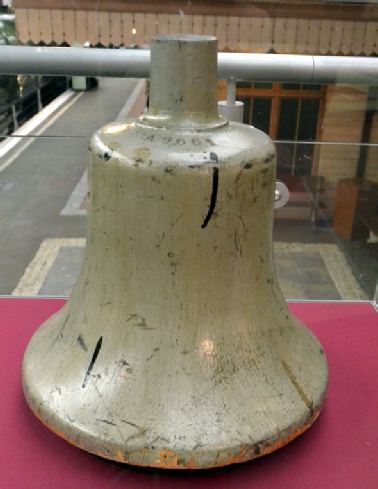 A wooden patten made at Swindon for a replica bell for King George V.

In 1941 the original bell went missing, it is said that it was taken by American GIs who wished to return it to America.

However, it was thought the original bell was too heavy for the GIs to continue to smuggle it to America and so it was thrown into the Serpentine Lake in Hyde Park, London.   Fortunately it was found shortly afterwards and returned to the locomotive - as shown in the picture to the right.

In the meantime a replica bell was made using this patten which is preserved in the Steam museum. 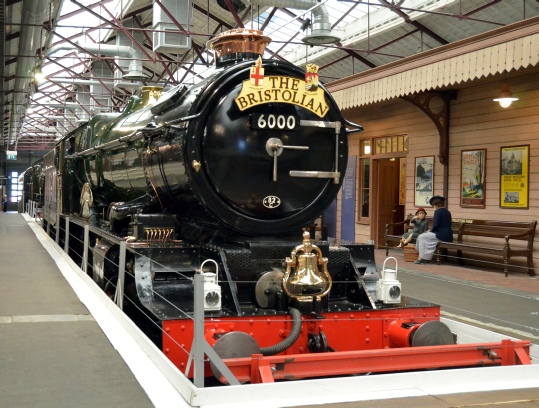 Shortly after completion at Swindon it was fitted with a Westinghouse (air) brake and shipped to America for the centenary celebrations of the Balimore & Ohio Railroad.

The exhibition was visited by over a quarter of million people and included a daily possession of locomotives.  There was a gentle slope down to the grandstand and 6000 was able to coast down the slope and pass in almost complete silence, whereas the American engines, even when new, groaned, squeaked and clanked - showing the excellence of Swindon workmanship!

After the exhibition, 6000 was a given a test run from Baltimore to Philadelphia, via Washington, with the engine giving a very good account of itself, despite using significantly different coal to what it was design for.

The Baltimore & Ohio Railroad presented the engine with a bell for its trial run, as well as two plagues which are fitted to the cab sides.

Images from under 4073 Caerphilly Castle 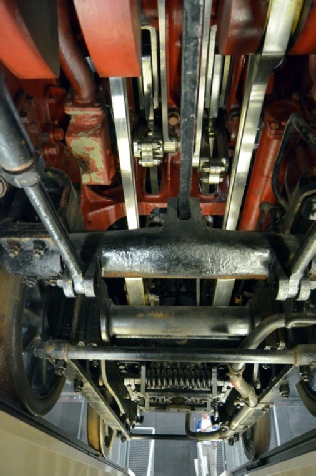 Connecting rods from inside cylinders - looking towards front 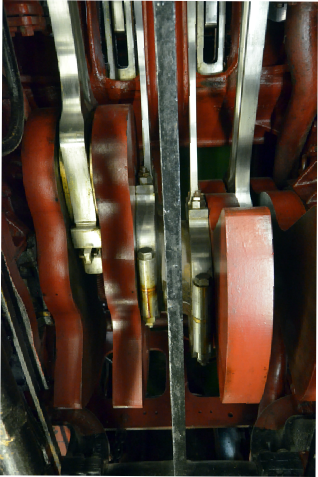 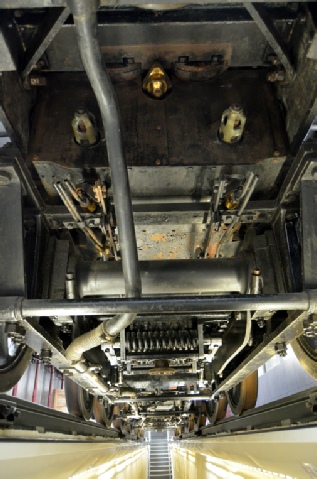 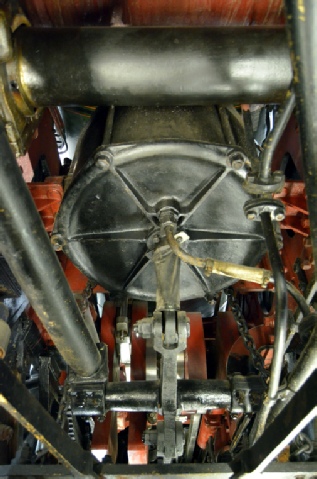 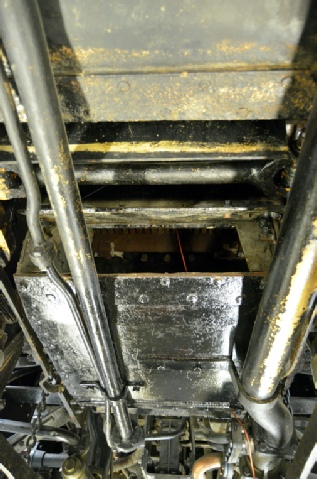 Under the locomotive firebox 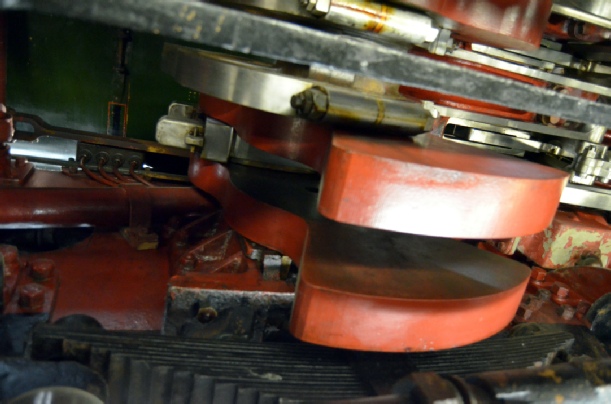 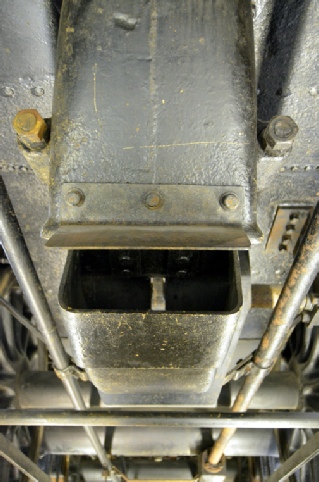 Another view of the inside cylinder balance weights 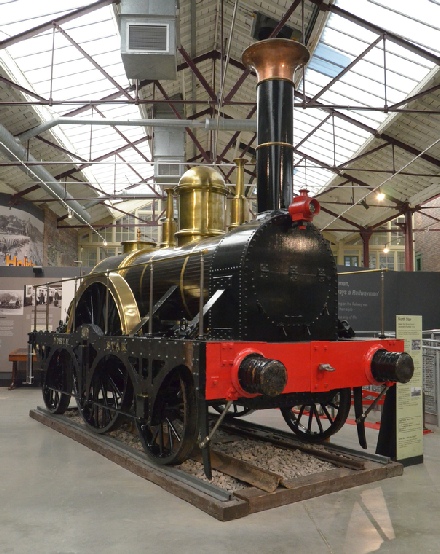 A replica of the Star Class of 2-2-2 broad-gauge locomotives - designed to run on 7ft ¼ broad gauge tracks - note the standard gauge rails, between the outer rails as a comparison.

The Stars were designed by Robert Stephenson and were built between 1838 and 1841.

This non-working replica was built in 1925, using some parts from the original.

This engine accompanied 6000 King George V to the centenary celebrations of the Balimore & Ohio Railroad in America. 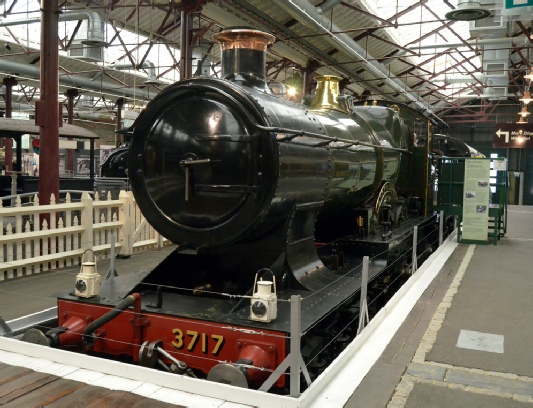 The locomotive was designed by  George Jackson Churchward and was built in 1903.

On 9th May 1904 it became the first steam locomotive in the World to achieve 100mph whilst going down Wellington Bank in Somerset, some thirty years before Flying Scotsman managed the same speed.

The locomotive was withdrawn in 1931 and initially displayed at the LNER’s new museum in York.  As this was considered a likely bombing target during the second World War the locomotive was evacuated to Sprouston station in the Scottish Boarders

The locomotive was returned to service in 1957 by British Railways before being withdrawn a second time in 1961 when it moved to the original Swindon Railway museum.

It was returned to full working order in 2004, the centenary of the speed record, but unfortunately was withdrawn in 2011 due to serious tube leaks and has not been restored to working order since. 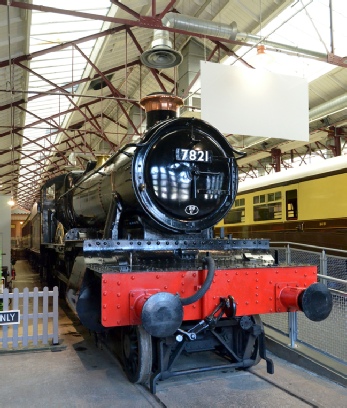 Whilst this lightweight 4-6-0 was a GWR design, this particular engine was built in 1950 by British Railways, in Swindon works.  The first batches of Manors were built by the GWR in 1938.

The lightweight of the Manors, gave them a wide  level of route availability, with an axle loading of just over 17 tons.

Originally not the best performers; possibly the start of the World War II shortly after construction restricted resources to improve matters. However some simple modifications in the 1950s resulted in significant improvements to draughting and hence locomotive performance.

This particular engine was withdrawn in 1965 and was sent to Barry scrap yard in South Wales.  Like many ‘Barry engines’ it was not cutup and was preserved in 1980.  It was fully restored in 1998 and originally ran on the West Somerset Railway before moving to the Llangollen Railway,  then the Great Central Railway and the Churnet Valley Railway, before moving back to the West Somerset Railway when its boiler ticket expired.

Due to the extensive amount of work required return it to operation, it has only been cosmetically restored.  Since this photo was taken the locomotive has subsequently been relocated to the Swindon Designer Outlet. 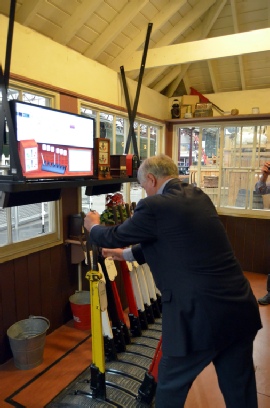 Under the expert guidance of a volunteer, it is possible to ‘work’ the levers in the correct sequence to allow the passage of simulated trains.

Locomotive & Carriage  member Humphrey Gillot is seen here moving a distant signal in to the off position. 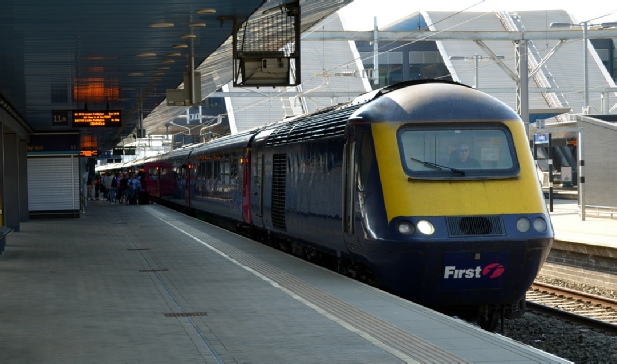 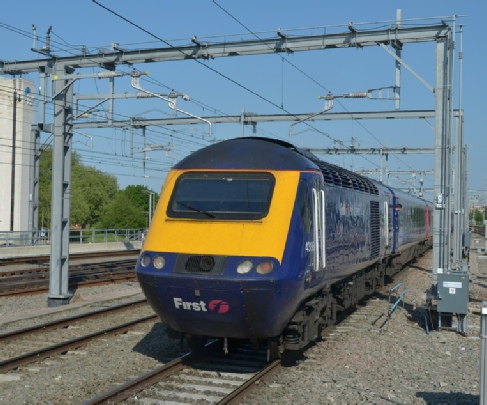 Our trip to Swindon was during the transition period from High Speed Trains (Class 43) to Class 800 /802 Intercity Express Trains on the Great Western.

43 133 is seen here waiting for departure to London Paddington from Platform 11 at Reading after arrival back from Swindon.

The production version of the High Speed Trains was introduced on the Great Western on 4th October 1976.

This particular power car was one of the last built, in 1982.

The Institution would like to thank the Steam Museum for providing great facilities for our AGM and for such an interesting venue.

If you have not visited Steam, the photos above show only a fraction of the many exhibits and a visit is strongly recommended, please visit:  Steam Museum for further details.  The museum is a short walk from Swindon station.