At quite short notice Alan Spencer managed to plan and execute a visit to Scotland, including visits to the Keith & Dufftown Railway, Strathspey Railway and the Cairngorm Funicular.

The party travelled to Scotland in two groups. The first consisting of three members departed on the Thursday, changing trains in Edinburgh before travelling on to Blair Atholl. The weather had now turned wet and the Atholl Arms Hotel made an ideal stop for a meal being adjacent to the station. Inside, the Bothy Bar has a large open fire and serves beers from their own brewery at Moulin near Pitlochry. The Moulin Brewery and the Strathspey Railway both appeared on television earlier this year in a BBC series called "Castle in the Country". A pleasant journey through the mountains and a short walk to the B&B concluded the day, the unsteady crossing of the River Ness being due entirely to the antics of the suspension bridge in the strong wind!

The next day was spent travelling along the scenic railway to the Kyle of Lochalsh and, after a short break, back to Plockton. Lunch was taken in the welcoming Plockton Inn washed down with "Spitfire" which had survived the long journey from Faversham very well. Unlike rain swept Kyle of Lochalsh, Plockton was looking it's best in the sunshine and the Plockton Hotel a few yards down the road provided superb views east along Loch Carron.

On Saturday we travelled on the Strathspey Railway to Broomhill. A pleasant walk looking at the snow covered Cairngorm Mountains in the distance took us past the well preserved buildings of Nethy Bridge Station. This was closed to passengers on October 18th 1965, with the line closing completely on November 15th 1971. Nethy Bridge at least still has a regular bus service, unlike many other villages along the route of the old Craigellachie to Boat of Garten railway. After another fifteen minutes we arrived at the Heatherbrae Hotel, pleasantly situated overlooking a wooded valley, and serving beer from the local Cairngorm Brewery.

Back at Inverness, traffic on the busy road to Clachnaharry was halted to allow a hotel boat through the swing bridge over the Caledonian Canal. Unfortunately we had missed seeing the nearby railway swing bridge at Clachnaharry being opened.

This same Saturday also saw the remaining four members, including the General Secretary, take advantage of the Weekend 1st on the 12:00 direct GNER train from London to Inverness.

On Sunday the combined group caught the train to Keith and on arrival walked to the Keith & Dufftown Railway's Keith Town Station, now rebuilt to the original design. The 2 car DMU carried us through the pleasant countryside to Dufftown with the surprise of free drams of whisky and pieces of shortbread. This was due to the Whisky Festival, centred on Dufftown, taking place this weekend. THE K&DR RAILWAY ASKED US TO MAKE CLEAR THAT FREE WHISKY IS SADLY NOT PART OF THEIR NORMAL SERVICE!

On arrival at Dufftown any thoughts some members had of walking the old railway track to Craigellachie vanished as the rain became heavier. Talking to members of the K&DR Alan Spencer offered help to enable them to operate their Class 73 and, as a start, some documents have been dispatched since our visit. Two members took the chance to acquire copies of the Sept 1961 Scottish Region timetable, both in good condition and showing the then new Glasgow electric service replaced by steam trains due to technical problems. Another trip on the railway to Keith and back followed, with further refreshments being handed out on the train.

On the coach to Elgin a discussion took place regarding a return trip to the area in 2006 to coincide with the Whisky Festival weekend, as well as visiting other preserved railways in Scotland. Arriving at Elgin in a downpour we made our way to Wetherspoons and enjoyed a late Sunday lunch.

Our train back to Inverness from Elgin was late arriving due to a problem with another train, however the weather was now much better and once on our way we had good views across the Moray Firth.

Monday saw us on the train to Aviemore for what for some was a second visit to the Strathspey Railway. Our train was hauled by Ivatt 2-6-0 No.46512 to Broomhill where the engine runs round the coaches a short distance beyond the station. Back at Boat of Garten the Boat Hotel was serving Cairngorm Brewery beer and several members had a light lunch of homemade soup. Of interest here was an old photograph of the ferryboat that gave the village its name, crossing the River Spey until a bridge was built in 1898.

Back at Aviemore the more adventurous enjoyed a ride on the funicular railway with the rain clearing just in time to give wonderful views, the others played safe by visiting Newtonmore. Our day finished with a meal and a choice of real ale in the Clachnaharry Inn close to where the Caledonian Canal meets the Beauly Firth. Also nearby is the original Highland Railway "Clachnaharry" signal box, situated at one end of a section of line which was double tracked as far as Clunes from 1914 until 1966.

On Tuesday the 07:55 GNER service carried us back to London in time for the L&CI meeting that evening despite torrential rain near Alnmouth, when almost zero visibility forced the train to reduce speed for a time. A really great weekend although finishing with a long day for everyone, especially Alan Spencer who finally arrived home in Derby at 23:00. 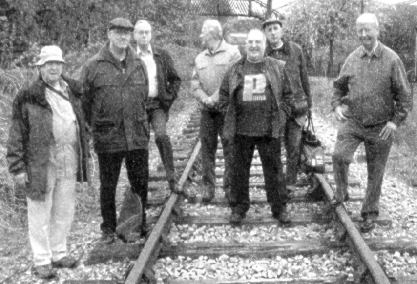 Members on the track between Keith Town and Keith Junction. Keith Junction is about 1/4 mile away behind the group and is now just named Keith. No orange jackets as this section is still closed, perhaps one day it will be reconnected to the main line to allow excursion trains to run through to Dufftown again

A final comment on the Scottish Visit by Alan Spencer, General Secretary: