The line was opened in 1875 as a 3 foot (914mm) line to transport hematite iron ore from mines around Boot.  Passenger traffic commenced a year later.  Unfortunately the mines all closed within ten years of the line opening and despite the increasing trade the line did not receive enough income to be viable and closed completely in 1913.

The line was then purchased by two model makers, Wenman Joseph Bassett-Lowke and Robert Proctor-Mitchell and converted to 15 inch gauge in 1915.  As well as passenger traffic, the line from was used to transport granite from  Beckfoot Quarry to Murthwaite crushing plant and was converted to dual-gauge between Ravenglass and Murthwaite, with the 15 inch gauge rails placed inside the standard gauge 4ft 8½ inches track.  Quarrying ceased at Beckfoot in 1958 and the line was sold at auction in 1960.  The line was purchased by the same company which ran the Ullswater Steamers, with support from the Ravenglass and Eskdale Railway Preservation Society.

The railway uses a Radio Control Train Order signalling system with radio communications used between trains and Ravenglass signalbox, outside of Ravenglass station limits.  At each passing loop and at Dalegarth, with a unique reporting number for each service.  At the reporting locations, the drivers’ inform the signaler hat they are within the loop and clear of the single track section each side ready for another train to use the line they have vacated.  Once ready to deport, the driver will  request authorisation to run onto the next section of single line ahead.  Conventional semaphore signals are used in and around Ravenglass station. 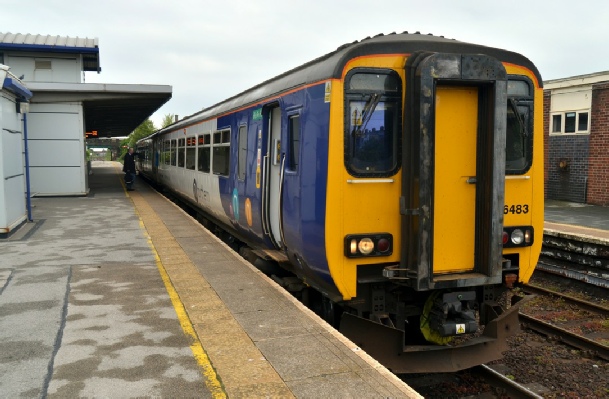 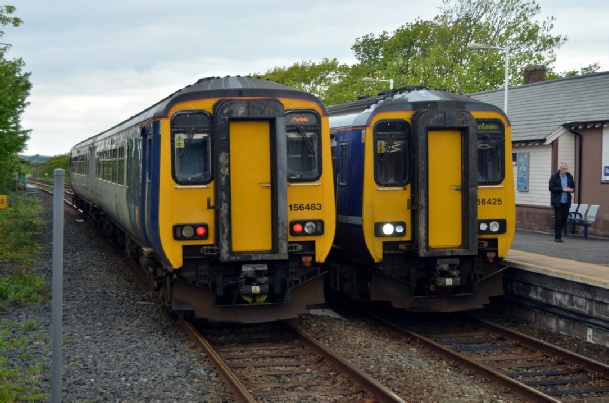 We alighted at Ravenglass.  As our train departed, the 2C50 11.07 Carlisle to Lancaster arrived on the opposite platform, formed of 156 425, still with conventional ‘blind’ destination blinds rather than the LED display on 156 483.  Northern has 47 Class 156s DMUs in total.

It was a short walk from the Ravenglass National Rail station to the Ravenglass & Eskdale Railway station.  After a tour round the workshop, our guide gave us a tour of the museum.

This is 0-4-0 No. 6 Katie, build in 1896 by Sir Arthur Heywood for the Eaton Hall Railway.  It was sold to the Ravenglass & Eskdale Railway in 1916, primarily for  works trains, though it also hauled passenger trains on occasions.

It then left Ravenglass in 1919 when it went to Southport then Fairbourne.  It was then dismantled in 1929 and the remains were displayed in the Narrow Gauge Museum in Tywyn.

In 1992 the Ravenglass & Eskdale Railway Heritage Group raised funds to restore the locomotive to original condition, which was finished in 2017 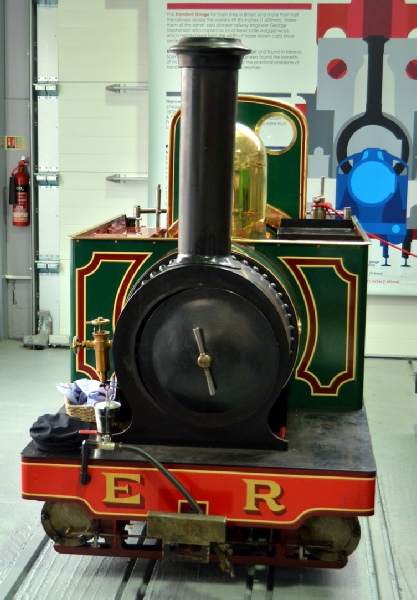 W.J. Bassett – Lowke engines Little Giant on the left and Synolda on the right.

Little Giant was the first  15 inch gauge Atlantic designed by Henry Greenly and was built by Bassett-Lowe  in 1905.  It was first used on the South Shore Railway in Blackpool before being used on other railways in the North of England.  It cost £323 when new.

Synolda was also designed by Henry Greenly and was the first 15 inch gauge locomotive to run on the railway.   This 4-4-2 was originally built for Sand Hutton Railway.

After the Ravenglass line was regauged it ran pleasure park lines at Southend and Manchester Belle Vue from 1942.  The engine was rescued from a closed zoo in 1978 and restored for use on the Ravenglass & Eskdale by apprentices of British Nuclear Fuels. 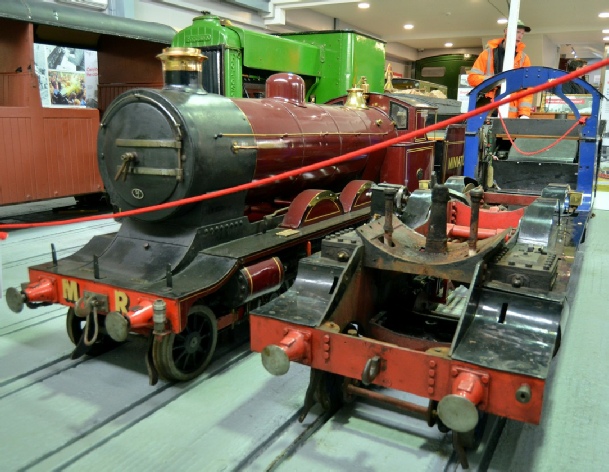 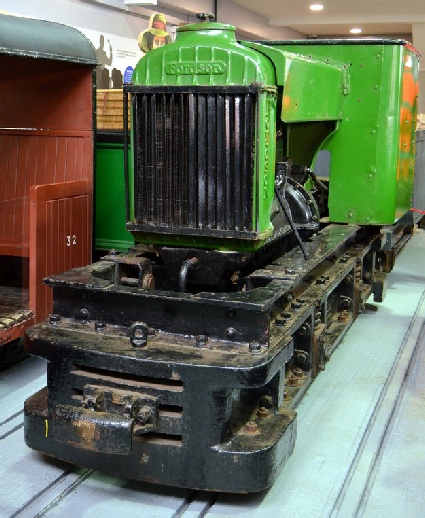 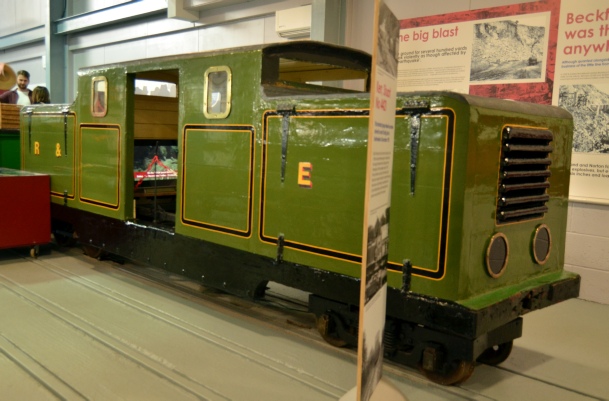 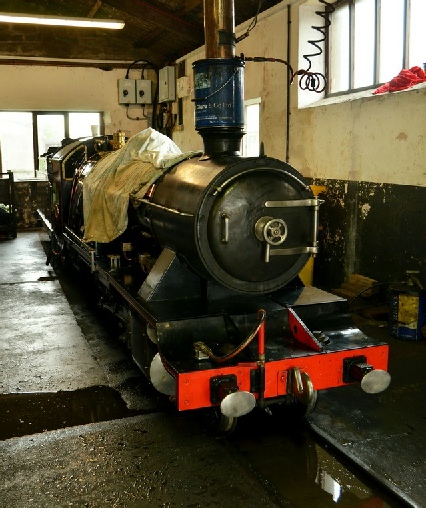 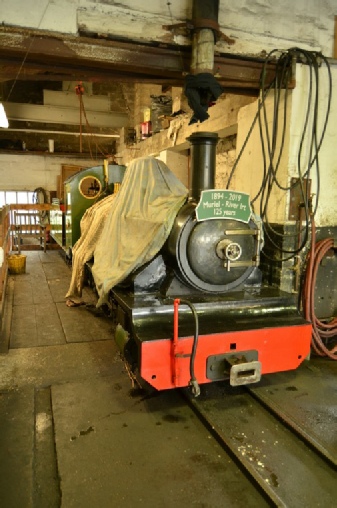 Quarryman was originally built by Muir-Hill, using a Fordson tractor engine.  It was originally used to carry granite cargo from Beckfoot Quarry, which it  continued to  do until 1953.

This engine is an early example of narrow-gauge internal combustion engine and was still working on permanent way duties until 1980.

No 1 Bunny, which was originally built in 1922 with a Ford Model T engine.

It was later rebuilt after a collision.  In rebuilt form it  holds the record for the fastest recorded end-to-end journey on the railway of just 15 minutes.

Bunny was withdrawn in 1959.   It was restored to original condition with a Model T engine in the 1990s by preservation society volunteers.

Our guide then gave us a very informative tour around the engine shed.

2-8-2 River Esk was built in 1923 by Davey Paxman of Colchester and was designed by Henry Greenly and is largely in original condition.

Also in the engine shed was 0-8-2 tender engine River Irt.  This is the oldest working 15 in (381 mm) gauge locomotive in the world.

Parts of the engine date from 1894 locomotive Muriel.   This was extensively rebuilt in 1927.

River Irt received a further rebuilt in 1972 when the cab was raised with the boiler then replaced in 1977.

Whilst not the most powerful on the line, this engine has a reputation for being very sure-footed in slippery conditions.

Whilst undertaking the shed tour, 2-6-2 No 10, Northern Rock arrived at Ravenglass with the 12.50 from Dalegarth.

Northern Rock was based on Romney, Hythe & Dymchurch Railway no. 2, Northern Chief and was completed in 1976.

The engine has travelled as far away as Dresden to publicise the railway. 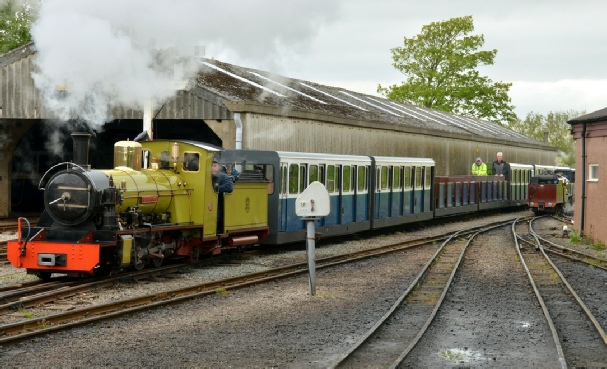 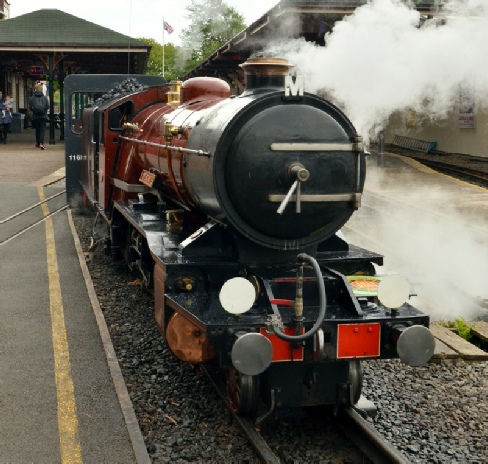 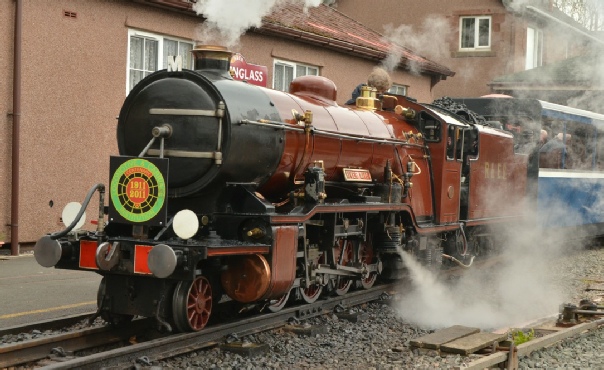 The L&CI 1911-2011 Centenary headboard was fixed onto the front of River Mitre, seen here shortly before departure from Ravenglass 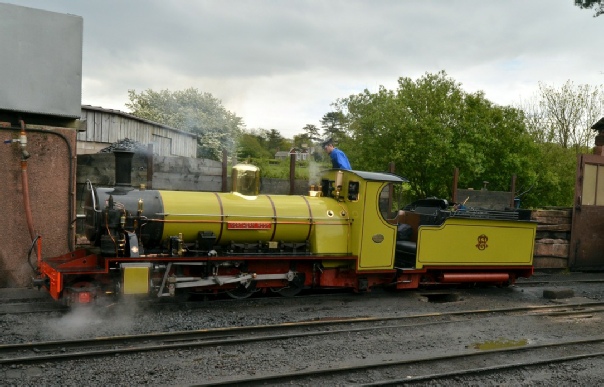 As we left Ravenglass, we passed No 10 Northern Rock being watered.  This construction of this engine was sponsored by the Northern Rock Building Society, hence the name

Upon arrival back in Ravenglass, River Mitre was uncoupled from the train and ran onto the turntable to be turned round before running round its train.

The L&CI 1911-2011 Centenary headboard was removed, to be used on the Keighley & Worth Valley Railway the following day. 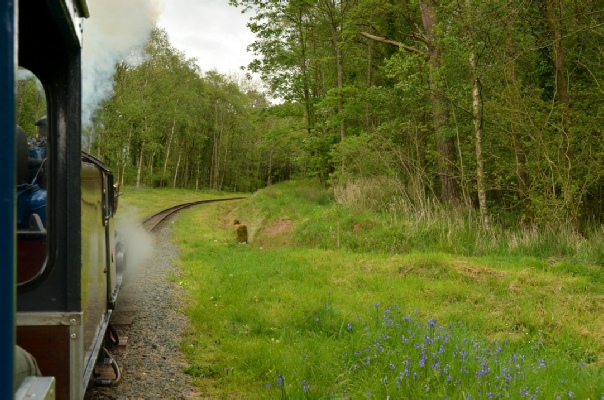 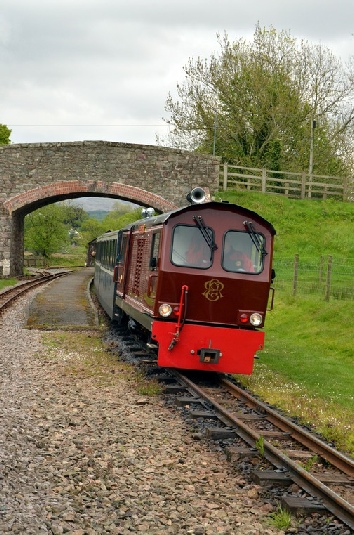 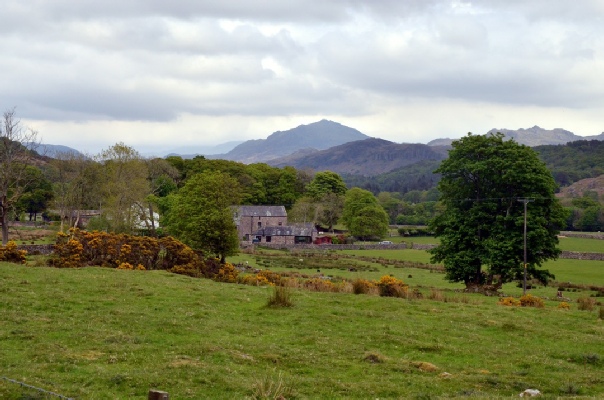 After leaving Ravenglass the line passes through sections of woodland.  Note the bluebells on the right - which could be smelt from the train.

At Irton Road we passed the 13.50 from Dalegarth which was hauled by diesel locomotive No. 11 Douglas Ferreira.

This B-B diesel hydraulic locomotive was  built TMA Engineering of Birmingham and was ordered in 2004.  It is fitted with a Perkins Diesel 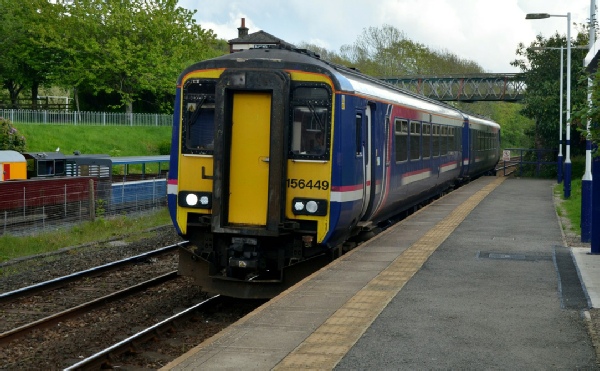 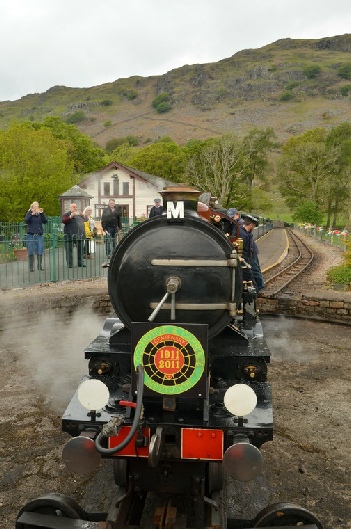 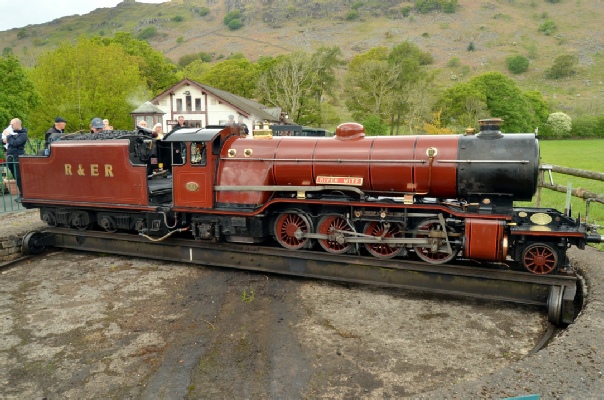 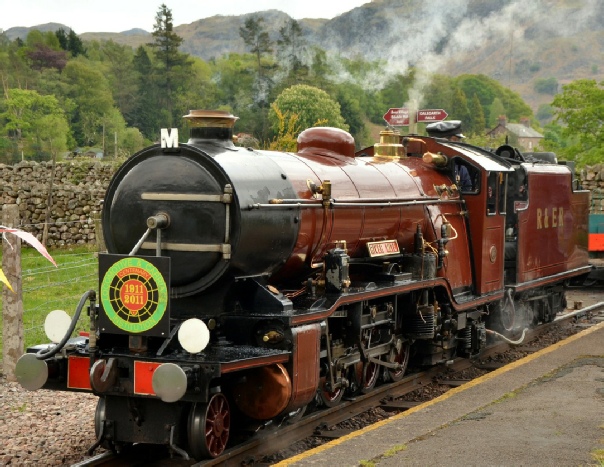 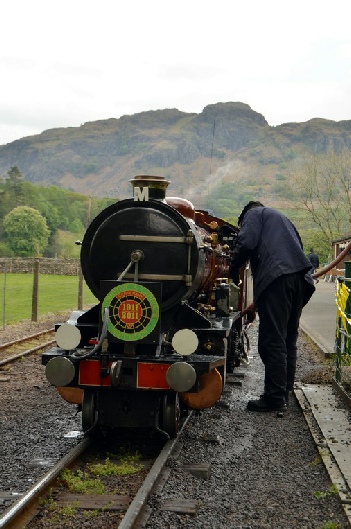 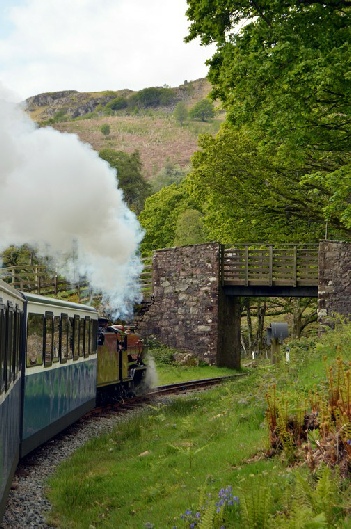 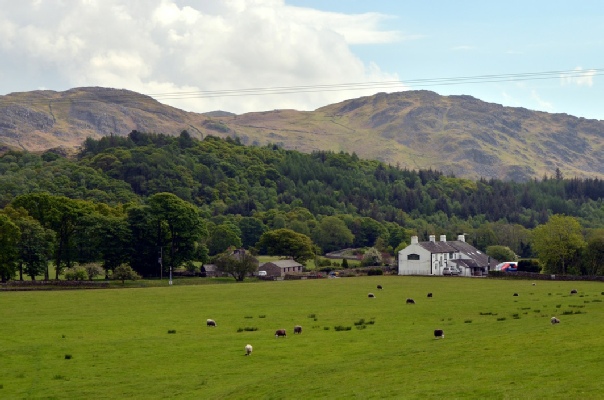 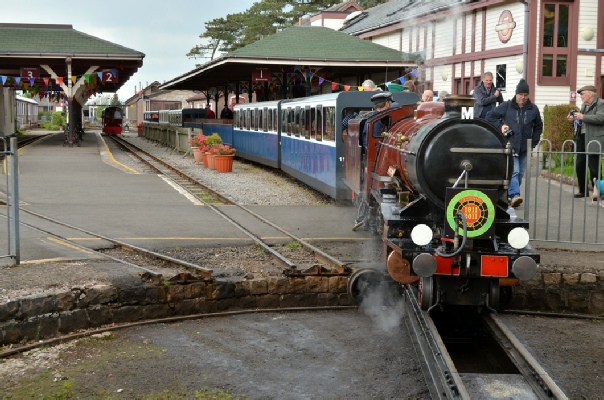 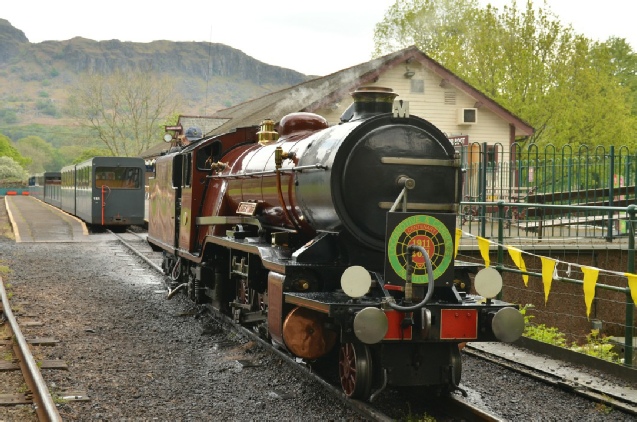 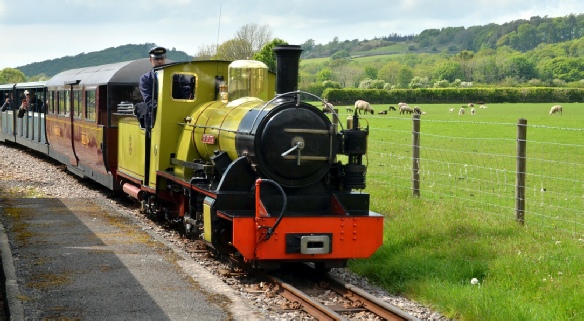 Upon arrival at Dalegarth, River Mitre was uncoupled from the train and moved forward onto the turntable.

The turntable was turned by hand.

River Mitre was designed and built by Clarksons of York and was delivered to the railway in 1966 and entered service in 1967.

River Mitre runs round the train at Dalegarth.

River Mitre (II) was built using the tender frame and coupled wheels from the original 1923 0-8-0 River Mitre (I).

River Mitre backs onto its train at Dalegarth.

River Mitre is a miniature version of a Gresley LNER 2-8-2 P1 with the tender based on those designed by Stanier for the LMSR.

The engine cost £8,000 to build, paid for by voluntary subscription.  It is owned by the R&ER Preservation Society.

We departed on Dalegarth on the 14.50 train to Ravenglass.

The photographer was brave/daft enough to sit in an open carriage - but it was not the warmest May day and he was rather cold by the time the train arrived in Ravenglass!

We again passed through the edge of the Lake District National Park on the way back.

The pub is the King George IV, dating from the 15th Century.  The river Esk is just beyond, though not visible in the photo

At Irton Road we passed Northern Rock on the 14.50 from Ravenglass

For those interested, there was a time for quick pint in the Inn at Ravenglass (great views and tasty pint of Ale) or at the Ratty Arms before catching the 2C33 16.29 from Ravenglass to Carlisle, which was operated by 156 449, still in First ScotRail colours

The Locomotive & Carriage Institution would like to give a big thank you to the staff of the Ravenglass & Eskdale Railway for a very enjoyable day out and a very informative tour around the workshop, engine shed and museum.

If you missed this trip, a visit to the railway is highly recommended, please click: https://ravenglass-railway.co.uk for further information.