Our AGM in 2014 was held in Wirksworth, with travel from Duffield, on the Matlock line from Derby, being on the Ecclesbourne Valley Railway 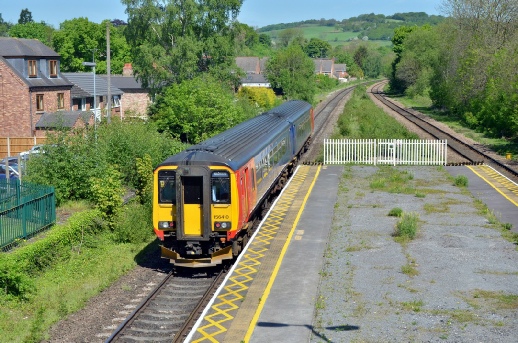 Travel to Duffield from Derby was by East Midlands Train Metro Cammell DMU 156 410, seen here as it departs for Matlock

And another Metro Cammell DMU!  Travel from Duffield was on a three-car unit consisting of two Class 101 Metro Cammel vehicles and a Gloucester Class 119 vehicle at the rear.    The front of the train consisted of Driving Motor Composite with Lavatory (DMCL) E50170 which entered service in 1957 and  was one of the final batch of Class 101s to be withdrawn, being taken out of service at Longsight depot on 31st December 2003.

More information on this vehicle at: E50170 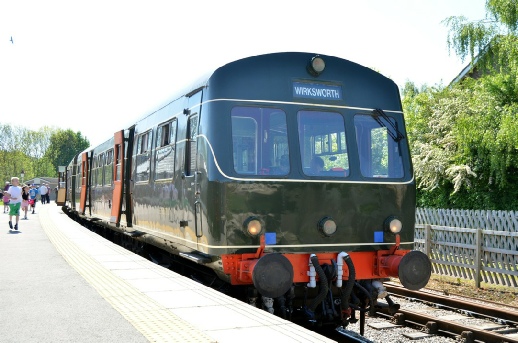 The Institution headboard was placed on the front of  E50170 before departure from Duffield. 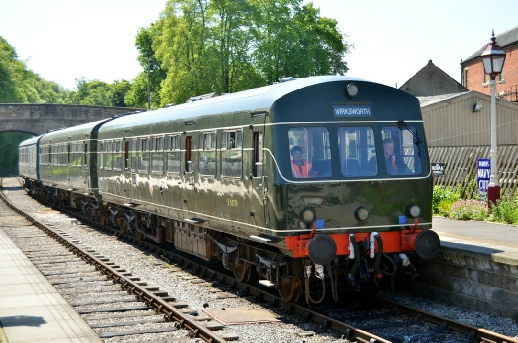 The DMU upon arrival at  Wirksworth.   The centre vehicle behind E50170 was 1957 Metro Cammel built TSL E59303.  This is the one of only three Class 101 centre coaches in existence and the only surviving Metro-Cammell TSL vehicle.

More information on this vehicle at: E59303 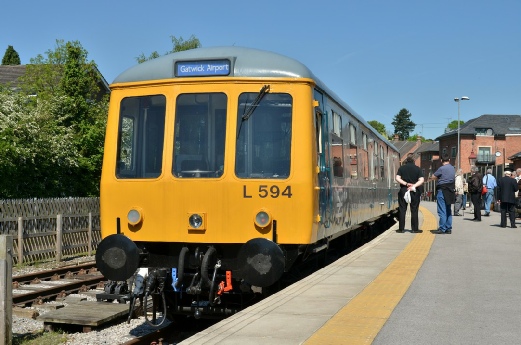 At he rear of the train was superbly restored Gloucester Railway Carriage and Wagon Driver Motor Brake Composite  (DMBC) W51073.

This vehicle ended its working life on the Reading - Gatwick Airport North Downs line, working from Reading Depot and has been restored in BR blue and grey colours.  This coach has a rather unusual  layout with a large first class area split by an internal partition, a large guards van and luggage area, ideal for passengers luggage on journeys to the airport and a small second class area.  There is only one passenger door per coach side.

This is the only class 119 vehicle currently in working order.

More information on this vehicle at: W50173 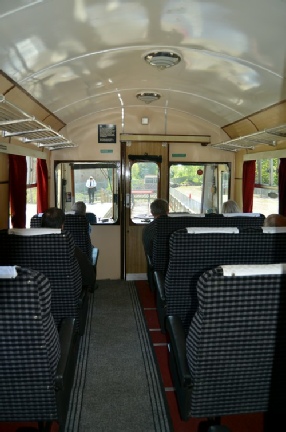 Many members chose to sit in the first class saloon of W50173 - the seats were very comfortable!

The very extensive restoration by the The Ecclesbourne Valley Railway DMU Group has included the ‘de-refurbishment’ of the vehicle include replacing the fluorescent light with original patten incandescent light fittings and substitution of the BR refurbishment applied off-white and bright-orange panelling with original style wood-effect Formica.

An account of the refurbishment of this coach can be viewed at: Restoration of Class 119 Driving Motor Brake Composite W51073

The Class 122 single-car driving motor vehicles are the great survivors with no less than eight of the 19 vehicles built in preservation.

Originally built in 1959 for use on the London Midland Region, Western Region and in Scotland, many were transferred to departmental use as route learning cars relatively early in their career .

Before the Class 122 moved to Laira they had their blue-asbestos insulation removed by Vic Berry in Leicester as well as having their seats retrimmed in an unique red-stripe moquette. BR AWS also was fitted for their extended life in the South West, using parts from withdrawn DMUs. The first vehicles which moved west had their AWS ‘kits’ installed at Laira Depot, though later units had it installed at Doncaster Works instead. However unlike most other DMUs which lasted into the late 1980’s they never had a full refurbishment, so they retained their incandescent light bulbs and wood-effect Formica panelling.

The Class 122s were ideal vehicles to work on the less busy Cornish branches on their own during the winter months as well as being used to supplement two car 101/108 formations when required.  They also saw use on the Cornish mainline from Plymouth to Penzance - the author, living in Cornwall at the time, would always chose to travel in a Class 122 in preference to a Class 101 when formed into the same train due to their superior ride quality and more cosy ambiance due to their lack of fluorescent lights.  They were finally withdrawn in 1992 - 1993.  All the Laira six have survived, along with two vehicles which were used in departmental use. 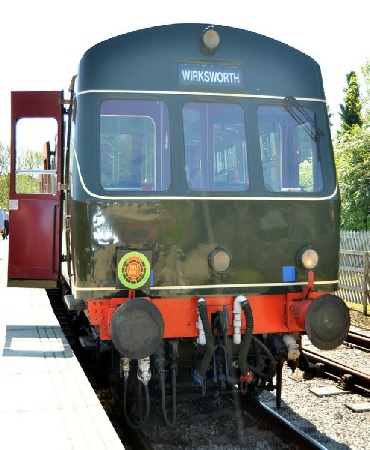 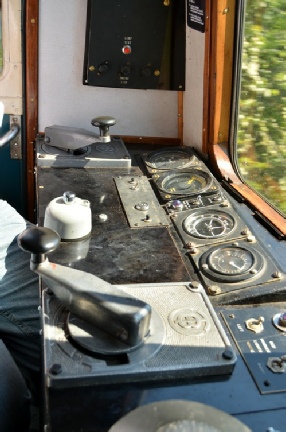 A trip along the line Duffield to Wirksworth

- a view from the rear of the train 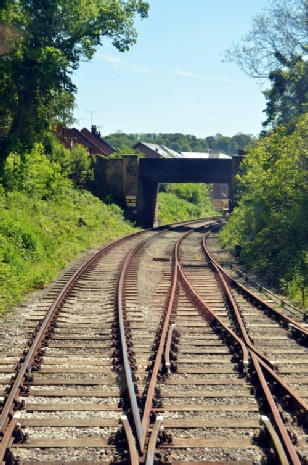 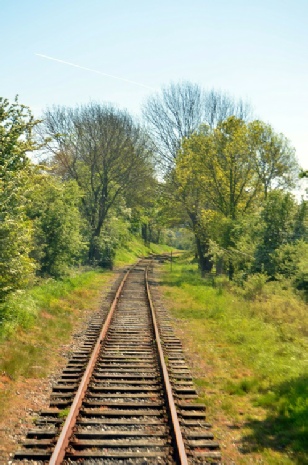 The very rural setting of the EVR 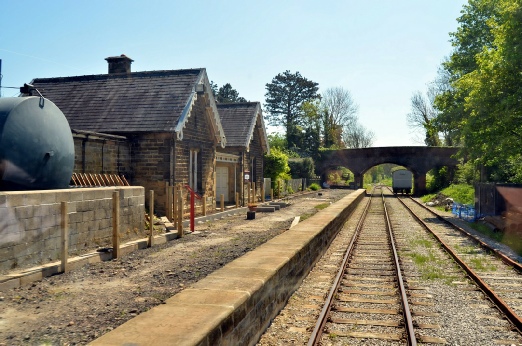 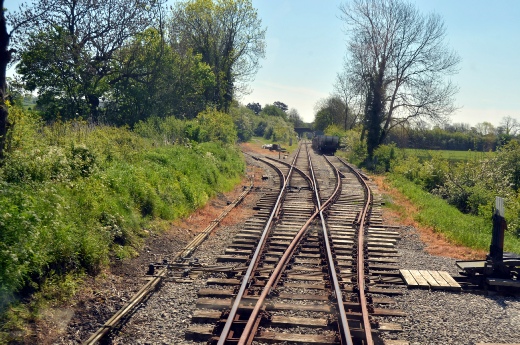 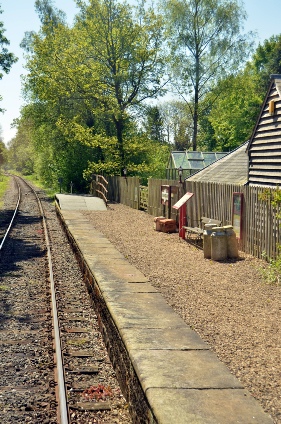 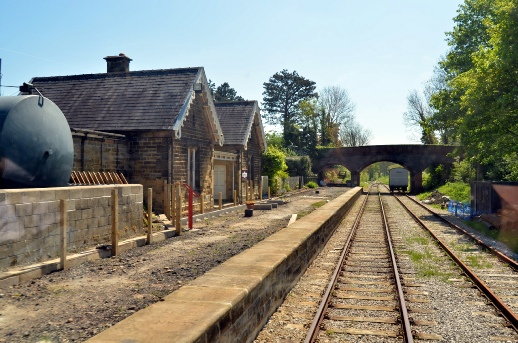 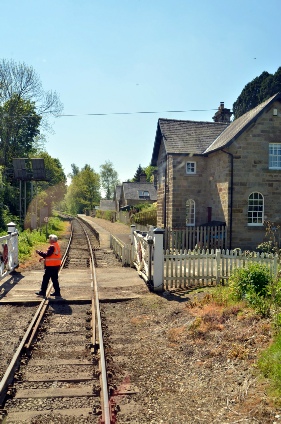 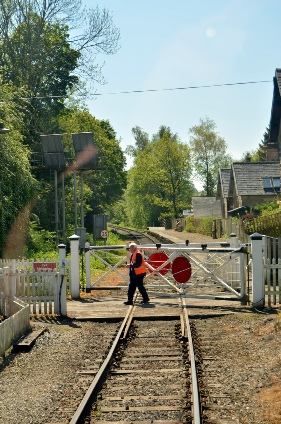 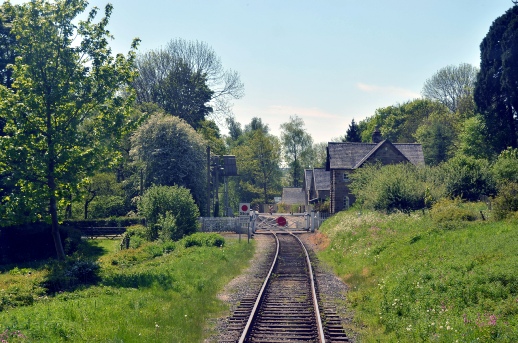 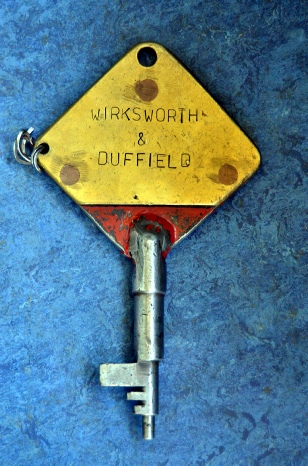 The token for the line between Wirksworth and Duffield 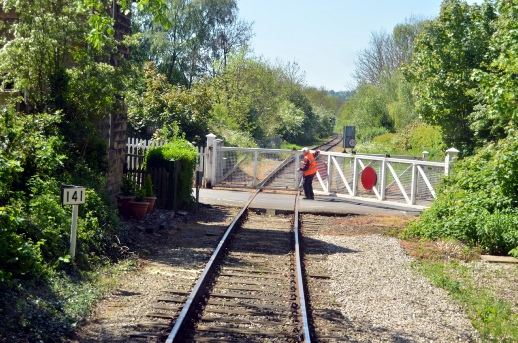 On the approach to Wirksworth, there is another train-crew operated crossing at Gorsey Bank.  Again the guard is reopening the barriers to the road after the passage of the train 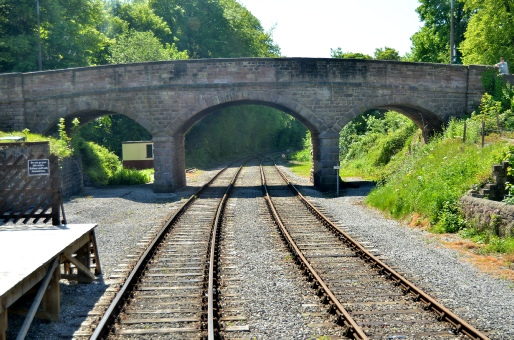 And finally  the view towards Duffield upon arrival at Wirksworth. 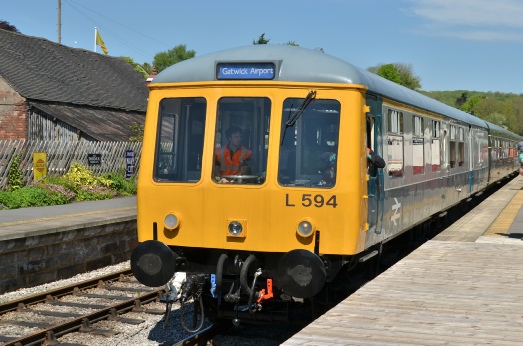 This vehicle ‘won’ Railcar of the Year 2013 by the Railcar Association for defining all odds in returning to service after being in a very poor condition and heavily cannibalised. 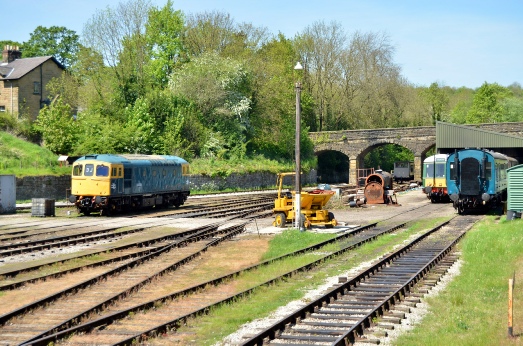 After the AGM there was an opportunity to travel up the hill from Wirksworth to Ravenstor Platform. 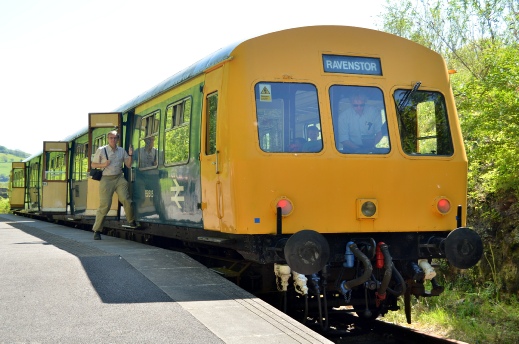 This view shows E51505 upon arrival at Ravenstor.  This vehicle was built at Saltley in Birmingham by Metropolitan-Cammell, as one of a batch delivered early in 1959 and was withdrawn in 2000, after last seeing service in the Manchester area.

More information about this vehicle at: E51505 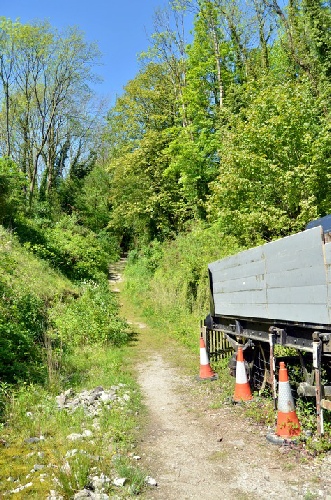 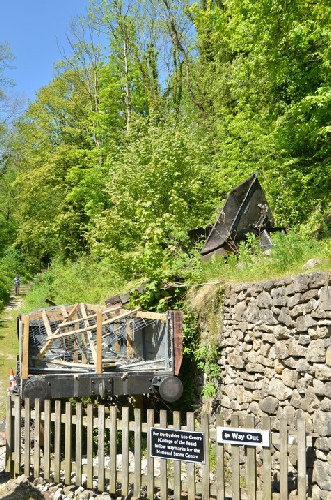 Ravenstor station was built by the Ecclesbourne Valley Railway and opened in September 2005.

These views show the view adjacent to the platform. 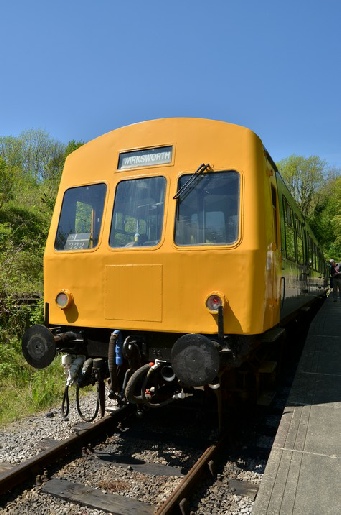 This vehicle was delivered to British Railways in October 1959 and was one of the last of the first generation DMUs withdrawn in 2001 of last being used in the Manchester area.

More information about this vehicle at: E51188 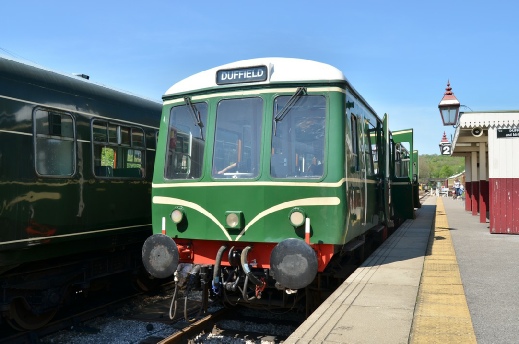 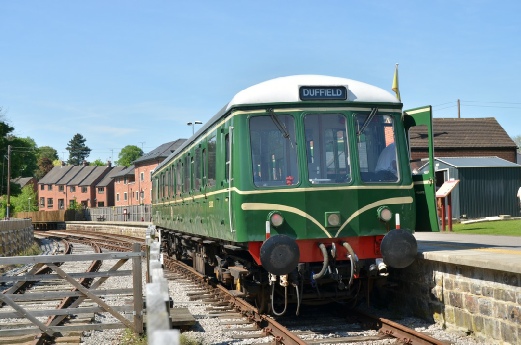 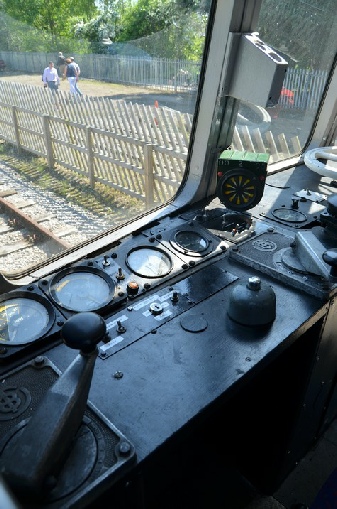 This vehicle moved from the Ecclesbourne Valley Railway to the Weardale Railway shortly after our visit in May 2014.

E55012 was used  by Loadhaul as a route learning vehicle after withdrawal from passenger service.  Numbered as 977941 it was painted  in the bold orange/black Load Haul livery.  After coming out of use in 1998 it was stored for ten years before being preserved in 2009.

Unfortunately its interior was converted for route learning duties, so it is missing some items such as luggage racks and it is now not entirely in original passenger service condition.

More information about this vehicle at: E55012