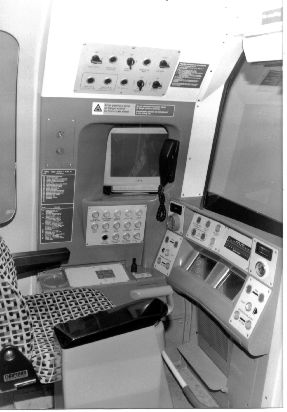 Corrys Test of France built the driver simulator which is an exact replica of a 1996 underground train cab – as used on the Jubilee Line.  The 59 trains of 1996 stock were built by Astrom in Washwood Heath, Birmingham (formally the Metro Cammel works) and were delivered between 1997 and 1999.  Each train consist of 6 cars and 47 trains are required for operation during the peaks.  The 1996 stock are the first London Underground trains with AC traction motors, which operate at 415V.  Control of the motors is undertaken by varying the frequency and mark-space ratio of the supply to the motors and so there is no series and parallel switching, as with a conventional DC motored train.

Control circuits around the train operate at 52V DC.  The train cab, and of course the simulator, features a combined traction and braking controller incorporated into the right hand arm of the driver’s seat.   An encoder within the seat reads the position of the control handle optically.   The red control handle is sprung so as to return to being parallel with the drivers seat and so has to be twisted away from this position all the time the train is moving, otherwise the train brakes are applied automatically – the same function as a conventional deadman’s handle.   Braking is achieved by moving the handle towards the driver, the nearer the higher the braking force.  Moving the handle away from the seat a distinct click is felt as the ‘coast’ position is reached followed by progressively higher traction power being applied as the handle is moved further away.

Two split-screen television monitors are located in the front left of the drivers desk to view CCTV pictures of station platforms whilst in the station and within station limits – essential for closing the train doors safely.  Directly in front of the driver, below the window, is located a speedometer which surprisingly, rather than a conventional dial, consists of a lit bar graph which progressively moves from left to right as the train speed increases.  Below this the target speed is displayed, controlled by track-side transmission based ATP.

Most commonly used control switches, such as door opening buttons, are conveniently located in front of the driver and less used switches, such as for train lights, are placed above the drivers left shoulder.  Various circuit breakers for equipment isolation are located behind the driver, whilst on the far offside of the cab, but easily viewed from the drivers sitting position, a train diagnostics and information panel is fitted.  Also on the offside, behind a hinged access door below the desk and next to the central detrainment or "K" door is the tripcock realise cord, which compared to everything else in the cab seemed rather old fashioned, consisting simply of a handle attached to a wire cord which disappears under the train down a metal tube.  As we were soon to discover, this has to be pulled up sharply to reset the trip-cock after tripping.

In the simulator the route of the Jubilee line is viewed out of the front windows of the cab.  The simulator can reproduce the whole of the Jubilee line in either direction.  Poor weather conditions such as fog can be simulated and various ‘incidents’ can also be reproduced such as signals changing to red aspects immediately in front of the driver, poor adhesion conditions and various on-train faults.   At each station stops the train alignment chevrons – more about these later, are viewed through he driver’s side windows and a view of the train in the platform is displayed on the in-cab CCTV monitors.   As the simulator was built before the trains entered service all the images shown on the CCTV monitors were real-life views of Central Line stations and 1992 stock.  Typical noises of the train in motion, doors opening and closing and so on are also realistically simulated.   It works, as it certainly felt as if we were moving once underway.

I was fortunate enough to be given a chance to drive the simulator a few stations after being given a demonstration by an instructor.  No sooner had I started the train before the tripcock apparatus stopped me.  This was reset by pulling the tripcock realise handle sharply, which realised the brakes but also reduced the speed significantly for a couple of minutes, which is a feature introduced to stop over-speed when following the stop-and-proceed procedure.  The fact that speed was automatically being reduced for a period of time was clearly displaced on the diagnostics screen on the far side of the cab.

When driving the simulator myself, I was surprised at the amount of force that I considered was required to keep the control handle twisted and prevent the deadman’s taking affect; so my knuckles were turning white with the effort.  Apparently this is typical of trainee drivers, but in time it is learnt that much less force is required and a more relaxed driving position can be adopted.

On the Jubilee line, as well as other Underground lines a right-side door-enabling device is fitted at each station stop which communicates with the train so as to ensure that the train, doors can only be opened on the correct side.   At each station, on the nearside of the train a board is installed viewed from the drivers side window.  This consists of three sections: first blue and white chevrons pointing in the direction of travel followed by a plain blue section followed by further chevrons pointing against the direction of travel.  Trains should stop so that the plain blue section is level with the driver’s side window.  However, the right-side door-enabling device will still operate with any part of the board visible.  If the train is not level with any part of the board by a reasonable amount the door-enable control will not operate.   Obviously on the underground section of the extension where platform edge doors are fitted it is vital that the trains stop reasonably accurately in the platform, but on the overground sections all the train may still all be platformed despite the train not stopping in the correct location.  In these circumstances it is possible to override door-enable control.  Once overridden, a large warning is displaced on the cab diagnostics screen telling the driver to be certain which side the platform is on before opening the doors.  Needless to say, I significantly overshot my first station stop and all the above had to be put into practice!    Fortunately I did rather better at my next stop, though I approached the station somewhat over-cautiously and was able to open my train doors normally – maybe there is hope for a driving career after all!