With the general downturn in freight traffic in this country during the 1990’s, aided somewhat by the introduction of modern locomotives (such as the Class 66, 67 and 92’s), some companies sought to get a few more years life out of their surplus engines.

Fast forward a few decades, and in 1969, seven redundant Class 77 locomotives were also sent to The Netherlands, and the unique HS4000 “Kestrel” was sent to Russia in 1971 too.

During 1992/93 around twenty Class 20 locomotives were hired to RFS Industries for use on the Channel Tunnel tracklaying work. However, it is not certain if they actually worked through the tunnel into France, or just within the UK infrastructure?

However, it wasn’t until the 1990’s that large-scale transfers of locomotives started to occur.

The first of these were four Class 20’s, which British Rail sold to CFD Industrie in July 1992. These were based in Autun, France for use of freight trains between Cravant – Avallon – Autun and Montchanin. They all received new numbers (2001-2004) and a vivid orange livery.

They returned to the UK in 2005 when traffic declined and eventually entered preservation.

In 1997, Foster Yeoman dispatched 59003 to Germany for use with Deutsche Bahn. Throughout its time in Germany it retained the name “Yeoman Highlander”, and eventually in 2014 was purchased by GBRf and returned to the UK to aid their ever-expanding fleet.

Direct Rail Services sent 20901-3 to Kosovo in 1999 as part of the ‘Train for Life’ providing Humanitarian Aid to the people of Kosovo following the war in that country.

Undoubtedly the biggest reason for export was the massive expansion of High-Speed lines through Mainland Europe. This started in September 1999 when EWS sent around forty Class 37 ‘heavyweight’ locomotives for the construction of the LGV Méditerranée to Marseilles.

These all retained British numbers and liveries throughout their exile period.

In 2001, a batch of fourteen Class 37/7 were sent to Spain for use on construction of the AVE line between Madrid and Barcelona. Over the next decade they worked from various depots as construction progressed across the country. They all received the light blue livery of Continental Rail and were given new external numbers. It was common to see four locomotives (two pairs back and front) on heavy construction trains on the steep gradients throughout the route. Due to various accidents (which also resulted in two Class 58’s being sent to Spain to assist), plus several major engine failures, only six of the original locomotives made it back to the UK in August 2012 when the contract was completed.

With the squadron introduction of General Motors Class 66’s in this country, EWS continued to send Class 37’s abroad, and several found themselves hired to CEAAV (Italy) and utilised on the HSL route from Milan – Rome – Napoli between 2001-03.

With the early demise of the Class 58, three examples were sent via Immingham Docks to the Netherlands to work for private operator ACTS. Straight from their arrival, they were utilised on the heavy container trains known as ‘Veendam Shuttles’ operating around Rotterdam. They saw extensive use up until 2009, when they were transferred to France for further use.

In September 2004 work started on the LGV Est (Paris – Metz) in France. Initially, nine Class 56’s and fourteen Class 58’s were sent via the Channel Tunnel to the St Hilaire base. As work continued, a further twenty one Class 56’s and five Class 58’s were sent to the construction base at Pagny-sur-Moselle. With such a large amount of locos present, they with re-liveried and ‘sectorised’ according to use – some utilised by Fertis (ballast trains), some by SECO (track-laying) and a few by TSO (engineering).

All the locomotives eventually returned to the UK.

Porterbrook sold two Class 87’s (87012/019) to BZK in Bulgaria in December 2006 for trails on Sulphuric Acid trains from Pirdop to Razdelna. A total of seventeen locos were eventually sent, most retaining their British liveries. Electric Traction Services (ETS) at Long Marston carried out the various electrical/cab/operational modifications, plus repaints into corporate green/yellow of BZK (applied to a handful of locos only).

The ‘acid’ trains utilise two locos hauling (with a third pushing), although it is normally a Romanian-built Class 40 electric which leads due to the superior adhesion from its Co-Co wheel arrangement.

A further eleven locomotives were earmarked to also reach Bulgaria, however, a downturn in traffic (plus recessionary pressures) saw this halted, with most of the locos sent for scrap.

Four did manage to escape the cutters torch, and were purchased by Europhoenix for other work in Bulgaria. A Class 86 (86233) was also sent as a source of spares.

These four locos were used to operate petroleum gas trains for private operator Bulmarket, originating in the Ruse, Varna and Belozem areas.

Ongoing extensions to the AVE line in Spain saw further use for a different batch of Class 58’s, with another six examples sent for use on the line towards Malaga. In 2008, even more redundant locos were dispatched from Toton Depot to the Valencia area.

These were painted at the East Midlands depot into GIF light-blue livery prior to movement.

The next major project to use British traction was the LGV Rhin-Rhone project in early 2009, where twenty four Class 58’s (now owned by DB Schenker) were sent to work on the section between Dijon and Belfort. The three 58’s that had previously been in Holland were also used.

All of the locos received an ‘all-over’ yellow livery with ETF or TSO branding (dependant on usage). In 2010, following completion of the work, the whole batch of locos were put into safe-storage at Alizay (Normandy) pending further usage elsewhere.

To date, they are still stored in France and have seen no further use!

By 2012, the works in Spain had progressed as far Alicante, and by 2015/16 nine locos remained ‘in service’ for use on the section from Monforte – Murcia.

Today, many of the locos are still ‘stored’ at various locations pending further use.

Europhoenix also sold eight Class 86’s to Floyd ZRt in Hungary between 2009 and 2013. These had to have EVM-102 signalling installed and were re-numbered to 450001 – 450008. The locos also received all-over black (with a pink stripe) livery as per the corporate Floyd colours.

A ninth loco was also dispatched as a source of spares in an attempt to keep these fifty year old machines operating. It is currently ‘dumped’ at the Budapest Keleti depot.

Of note is that all the electric engines sent to Hungary had to have a second pantograph fitted, as this is an operational requirement for the country. Floyd also took delivery of three Class 56’s – 56101 and 56115 in 2012, with 56117 joining the following year.

The loco’s work a variety of trains across Hungary, with much of it being spot-hire work.

Another oddity to reach Hungary is 47375 – the only Class 47 to ever move abroad.

In October 2015 it was acquired by CRS (Continental Rail Solutions).

Despite being ‘new’ (although nearing eight years old at the time), EWS started to send Class 66’s to France in 2005; operating under the ERC (Euro Cargo Rail) branding. With the takeover by DB (Deutsche Bahn) in 2009, this practice continues as a way of utilising a fleet of locos that would otherwise by lying idle following the downturn in coal and steel traffic in the UK.

However, these locos do return regularly to Toton TMD for heavy maintenance.

A further batch of fifteen Class 66’s were sent to Poland in April 2010.

In May 2012, ten Class 92’s headed to Bulgaria. Various modifications were required, although being built with two pantographs, this wasn’t an issue, as with the 86’s. The Class 92’s work (mainly in pairs) on the imported copper ore trains from the Port of Burgas to the refinery at Pirdop, although sometimes they pair up with ex-DSB Class EA3000 locomotives.

Freightliner have also followed DB Schenker into Poland. Sixteen of their locos (Class 66/5 and 66/6) have been re-assigned to Freightliner FPL, and given new UIC numbers. Various modifications have been made, rendering them ‘out of gauge’ for a return to UK railways.

Since 1999, almost 280 different British locomotives have been sent to work abroad. 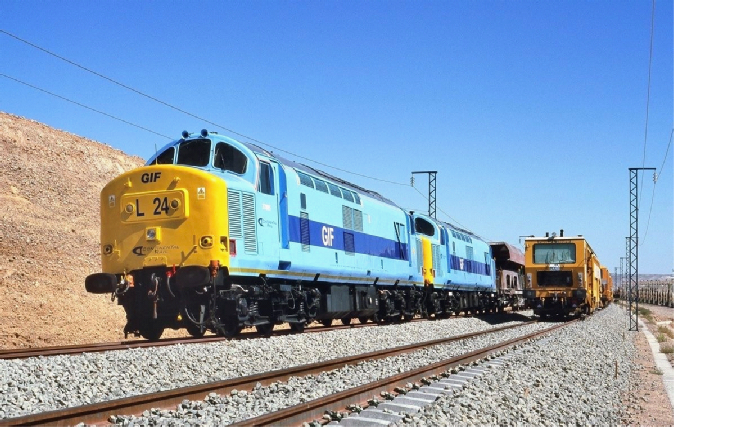 Two Class 37/7’s on hire to Continental Rail (37885 & 37888) are seen heading a ballast train along the AVE line from Madrid to Zarragoza. The pair are seen at Salillas de Jalón.

Due to the steep gradients, these trains operated with four locos – two at each end of the train. 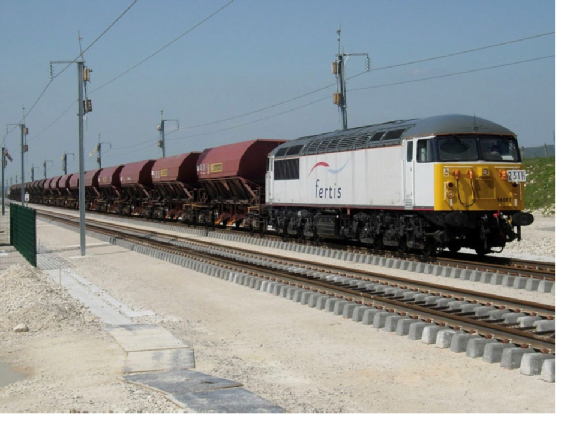 EWS Class 56087 in Fertis livery is captured at Chalons en Champagne working a construction train on the TGV-Est route. 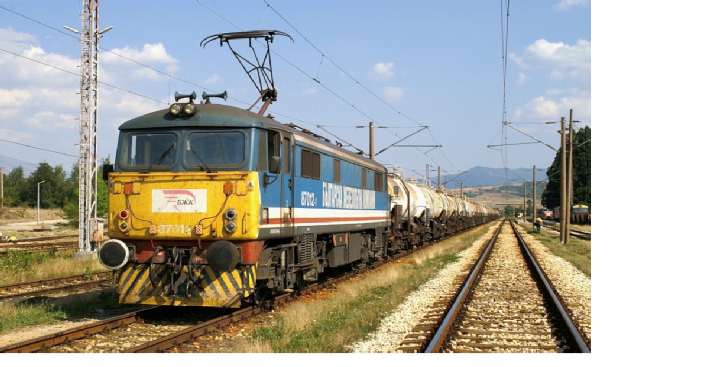 In a revised Network South-East livery, Class 87012 stands at the head of a tank train in Pirdop Yard, Bulgaria. 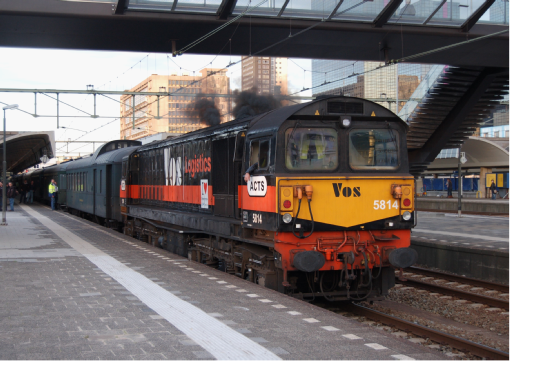 Working a railtour from Rotterdam to Vlissingen, ex-EWS Class 58038 carried VOS livery whilst on hire to ACTS (5814) in The Netherlands.

All three Class 58’s moved to France (for TGV-Est work) following the completion of their hire contract.